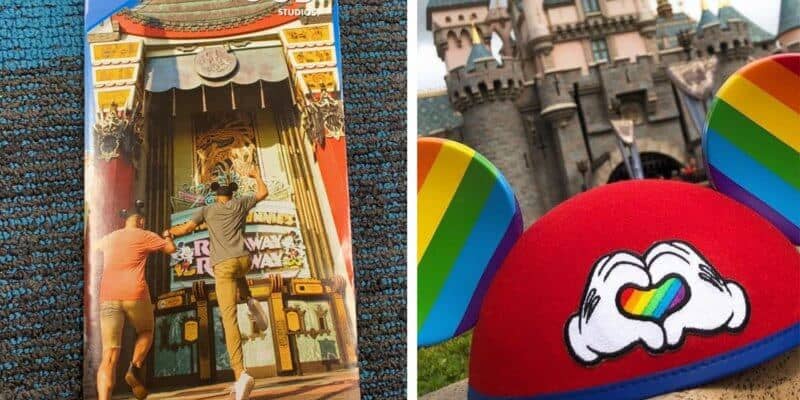 When you are going to Disney for the first time, you will likely need to snag a guide map from the front of the park to know your way around. Of course you can also use the My Disney Experience App, but there’s something about taking home a Disney Park map that you used while in Disney that holds a certain nostalgia to it. And now, for the first time ever, Disney is showcasing a same-sex couple on the front.

As we just discussed, Disney World park maps are what many Guests depend on to be able to navigate throughout the parks, and Disney wants you to take one! Disney will always want you to have the most magical and stress free time at their parks, and helping Guests move from Tower of Terror to Slinky Dog Dash with ease is a big part of that.

Each Disney World Park — Magic Kingdom, EPCOT, Animal Kingdom, and Disney’s Hollywood Studios — have a unique park map. Disney Springs also has its own map. The covers for each of these parks maps have been known to change annually, often to reflect the newest attraction or park area so that visiting Guests instantly feel they need to go check it out.

Hannah Wickstrom (@hannywicks) took to Twitter to showcase the new Disney park map noting, “Hello Hollywood Studios has a same sex couple on the front and I am LIVING.”

Hello Hollywood studios has a same sex couple on the front and I am LIVING ?❤️ pic.twitter.com/MCuSg4eVbI

It is awesome to see Disney being inclusive on their promotional material, normalizing same-sex relationships for any Disney Guest that enters the park! It is also interesting to note that Disney is continuing to not showcase too much face on their park maps, especially considering masks are required at the moment. If Disney did put a masked photo on their cover, that would mean the photo has a potential expiration date once we are able to pass through the pandemic. By keeping Guests backs on the park maps, the photos have a much longer life span, and are also not promoting a mask-less Disney vacation.

Previously the Hollywood Studios park map cover showcased the parks newest land Star Wars: Galaxy’s Edge with what is assumed to be a brother and sister holding hands.

If you want to head on over to Disney’s Hollywood Studios, why not book a Disney vacation today! Click here to get started.

Do you think it was time Disney featured a same-sex couple on their guide maps?