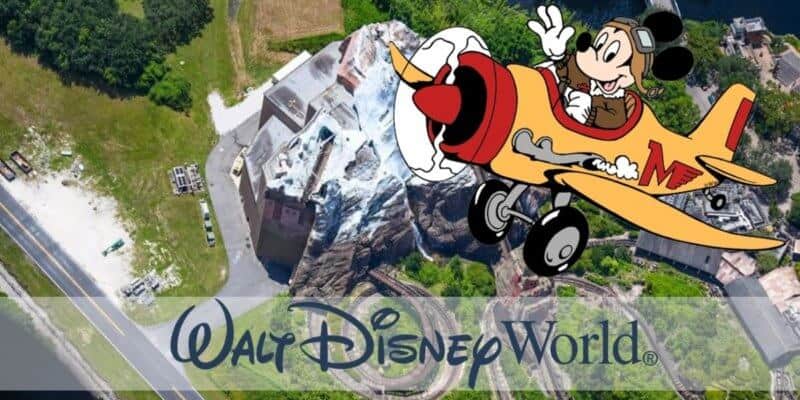 Hidden Mickeys are one of my favorite design elements on Walt Disney World property. They can be seen anywhere from on theme park attractions to inside the Disney Resorts to even being molded in the concrete!

In case you aren’t familiar with Hidden Mickeys, they are a representation of Mickey Mouse’s head which has been inserted very subtly into rides and attractions on Disney property as well as in other locations all around Disney properties including Resorts. Going beyond the parks, Disney has also been known for placing Hidden Mickeys within animated films and television series as well. But one of my all time favorite Hidden Mickeys at the Disney theme parks can only be seen from a bird’s eye view.

Thanks to our friend Jonathan Salazar, also known as @thedisneypilot, we can see the Hidden Mickey in his recent Instagram post. Jonathan flew over Expedition Everest at Disney’s Animal Kingdom to get some aerial photos of the attraction, in which you can see a special Hidden Mickey.

The mountain itself serves as Mickey’s head while the two tracks on either side form his two ears — how cool!

?It’s nice to see Expedition Everest alive again! ? . . Take a look at the backside of this giant Hidden Mickey too! . . ?Have a Magical Day everyone! . . (Taking recommendations for the next post)

Another Hidden Mickey that can only be seen from the sky is actually the world’s largest Hidden Mickey. It is located over at the solar energy facility near EPCOT. You can read more about this Hidden Mickey here.

Have you ever spotted a Hidden Mickey while visiting Walt Disney World, Disneyland Resort, or any other Disney Resort around the world? What about while watching a Disney animated film or television show? Let us know where your favorite Hidden Mickey is in the comments below!