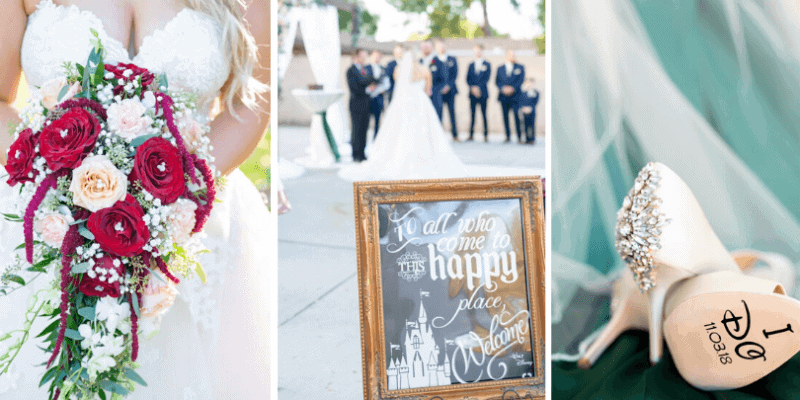 If you’re a huge Disney fan and love adding touches of Disney magic to your everyday life, chances are you’ve probably fantasized about what it would be like to have your very own disney wedding — or at least to attend one! But while Disney Fairy Tale Weddings can be just that — a real-life fairy tale — the cost of getting married at a Disney Park, aboard Disney Cruise Line, or at Aulani can definitely add up.

One couple decided to have their own Disney-inspired wedding, but with a twist! They got married at a venue of their choice surrounded by their loved ones, and even though they didn’t fly out everyone in their family to Walt Disney World, the occasion was nothing less than magical. From what we can tell from these photos, it looks like this couple did everything they could to have a tasteful yet magical event with the most subtle Disney touches that every fan could appreciate.

Nathan and Dana are a Disney-loving couple — they even got engaged at Disneyland! And because Disney holds such a significance in their lives, . They added hidden Mickeys to everything from the bride’s bouquet to the seating chart to the champagne glasses. They had Disney-inspired signature cocktails called the Tinker Tonic and the Jack Sparrow. And the bride, Dana, even looked like a real-life Disney princess, complete with a braid Elsa would be envious of and a dress that we could totally see Rapunzel rocking.

“They brought the Disney magic to their wedding by incorporating little Mickeys into the bouquets, adding a special saying on Dana’s shoe in the Disney font, and even had all the tables at the reception named after the different rides at Disneyland. Dana was an absolute princess on her wedding day. Her hair reminded us and all her guests of either Queen Elsa or Princess Rapunzel!” said the wedding photographer Kevin Lane.

Take a look at some of the photos from Dana and Nathan’s wedding below!

Would you rather get married at your dream Disney destination, or would you want to add some Disney-inspired touches to your magical day? Let us know your ideas for a Disney wedding in the comments!