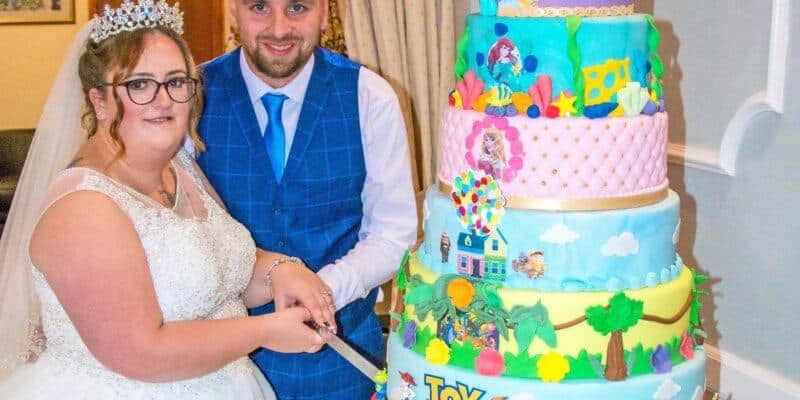 Over the weekend, Disney superfans Sean and Siobhan exchanged vows with a special themed ceremony–a magical ceremony sure to get them off to the perfect start. And of course, they had to have a fantastic disney wedding cake to celebrate!

Siobhan Perdue, age 24, loves Disney and on October 12, she married her Disney-loving fiance, Sean. Their over-the-top wedding featured Disney touches throughout the event, but none quite as impressive as the 10-tiered wedding cake that served as the centerpiece of the reception. It stood 3 feet, 10 inches tall and featured several Disney and Pixar characters and films.

The cake cost the happy couple more than $1,200 USD, though the bride wouldn’t divulge the exact cost of the elaborate cake that featured tiers inspired by Disney’s Beauty and the Beast, Snow White and the Seven Dwarfs, Sleeping Beauty, Aladdin, The Little Mermaid, Frozen, and Cinderella. There were also tiers inspired by Pixar’s Toy Story and Up.

The cake was created by Blissful Bakes and Tea Room in Swansea, Wales, and it’s the biggest cake the bakery has ever made. It took 6 hours to bake each of the cakes, and then it took another 16 hours to decorate it. There were tiers made of chocolate, red velvet, vanilla, caramel, carrot cake and toffee. The cake also featured a Mickey and Minnie Mouse topper.

But the Disney theming didn’t stop with the elaborate cake. Each of the ten tiers coordinated with a themed guest table. The Toy Story-themed table had balloons and figurines that kept with the theme, as did the Frozen-inspired table and every other Disney-themed table. Place cards at the tables coordinated with the Disney theme assigned to the table. In fact, the entire reception was chock full of Disney inspiration.

Instead of flowers and sheer linens, the couple opted for balloons made into the likenesses of Mickey and Minnie Mouse.

The couple had the wedding they wanted but some people online had other opinions of the wedding, comparing it to a children’s birthday party and suggesting it more appropriate for a five-year-old, rather than people in their 20s and 30s. A picture of the couple’s enormous cake ended up on a Facebook Group called “That’s It, I’m Wedding Shaming,” where comments ranged from rude to downright mean.

“Disney adults are incredibly off-putting,” one comment read. Still another person wrote, “Adults that obsess over Disney terrify me.”

At least Siobhan isn’t letting the naysayers get to her. “When I first saw the cake, I almost cried, it was perfect,” she said.

The bride was happy with her wedding, her cake, her decorations. And isn’t that all that matters?

(And we at Inside the Magic think it’s pretty epic ourselves!)

Do you think Disney-themed weddings go too far, or are they magically delightful? Let us know in the comments section below.