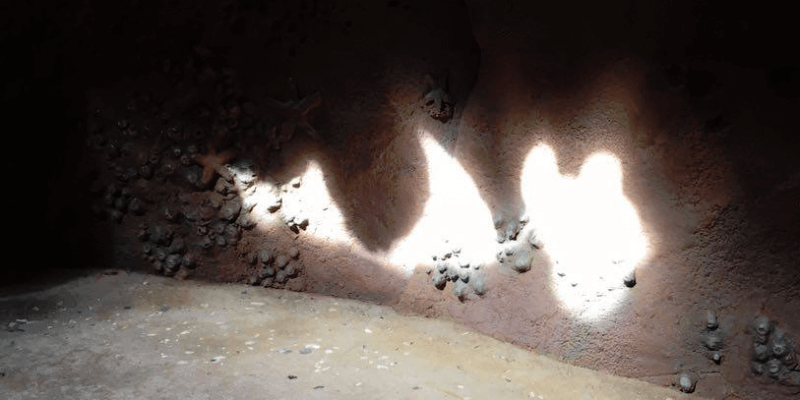 If you’ve been around Disney park fandom for a while, you know about Hidden Mickeys–representations of the famous mouse intentionally left in unobtrusive places meant to be normally overlooked, unless you’re taking the time to really analyze things closely. The classic Mickey Mouse shape–one large circle and two smaller ones for the ears–is the usual Hidden Mickey pattern. You can find it on rockwork, in mosaics, or silhouetted in windows. There are, quite literally, hundreds of them at Walt Disney World.

Today let’s look at the seven most unusual and unique Hidden Mickeys. Most of them are not the usual shape, and some of them really stretch the definition!

#7 – Stitch exit doors at the Merchant of Venus

As you leave the attraction, look for “Mickey” on one door and “Mouse!” on the other, written in the galactic font from Stitch’s universe. While there is a classic Hidden Mickey silhouette in a window high above the gangsters animatronics, the more unique Mickey at the Great Movie Ride can be found a few moments earlier on the wall opposite the James Cagney animatronic. Look for a poster that has been covered up by other advertisements, but still shows Mickey’s distinctive tail and shoe. #5 – A Hidden Steve Barrett, author of the fan books on Hidden Mickeys #4 – Center Stage Mickey, seen from above

This is a Hidden Mickey you would only really be able to see if you could fly…and time travel back to the early years of Disney-MGM Studios. If you stood on the stage in front of the Chinese theater and looked toward the park entrance, you’d see that the main “hub” of the park is actually a giant Mickey face, with the lake one of his circular ears (the other ear was never more than loosely defined and depended on rooftop paint to even remotely exist. Portions of Mickey’s face have been changed over the years, but the long arch of his eyes and eyebrows are still there if you look closely at the arrangement of the planters.

#3 – Once a year Mickey at the Little Mermaid ride

There’s a classic three-circle Mickey shadow seen in the rockwork of the queue of Under the Sea, which would normally not be very unique. But this particular shadow only shows up once per year, as it depends on the sun being aligned just right. Even better, that one day per year is Mickey’s birthday (November 18), and the effect is best right at noon. A painting of Mickey that’s almost two feet tall, plainly visible against a plain wall right on the main walkway, normally wouldn’t qualify as any kind of Hidden Mickey, let alone a unique one. But this one thrives in its irony and metacognition. The badly-drawn Mickey is clearly meant to represent some amateur artist’s poor attempt at trying, but not quite mastering, a depiction of the famous Mouse. This is already dripping with irony, but the words seal the deal. “Fichwa! Fellow” are the words written below it, and you might think “Fichwa!” is a greeting (to you)–especially when you see that Mickey is waving. But in Swahili, “fichwa” means “hidden,” and now the whole meaning becomes clear. It’s a Hidden Mickey hiding in plain sight but also subversively referring to itself as a “hidden fellow.” Just before your car starts up the switchback where the laser trees are, you enter a room where a light scanner passes over the car, and you can see a diagram of the car on the wall, with many technical words surrounding it. Buried in here is a URL – http://wdw2.wdpromedia.com/media/wdw_nextgen/favicon.ico – and it links to a small digital picture of the classic Mickey shape. Thus, the URL itself is a kind of super-secret Hidden Mickey!