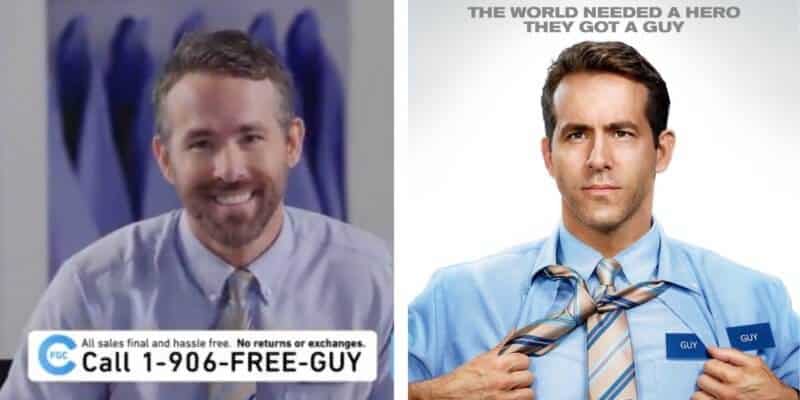 Ryan Reynolds is already almost part of the Disney family as several of his films he had with 20th Century Fox now are part of Disney thanks to the acquisition.

But as we all know, Reynolds is known for his explicit language, raunchiness, and his one-of-a-kind personality, which means a lot of people have been questioning if he will “fit into the Disney family”.

Marvel fans are still waiting to see what will happen with the Deadpool franchise under Disney, but that isn’t stopping Reynolds from trying to get a good word in with Disney.

Reynolds just released a teaser for his upcoming film, Free Guy, and we think he is already fitting right in by pushing some early merchandise.

In the hilarious teaser, Reynolds attempts to fit in with the Disney family as he offers limited-time deals on some of the merchandise from the upcoming film. From the Authentic Guy’s Blue Shirt to the Authentic Guy Collectible Tie, Reynolds has some pretty sweet deals to offer viewers.

Reynolds even offers a deal on the Authentic Guy Name Tag, in which, already has a buyer!

You can watch the full teaser below:

Free Guy will mock a video game type film, almost like Ready Player One, as the story follows Guy, the protagonist of the film played by Reynolds, who is a bank teller. Guy soon discovers he’s actually an NPC (Non-Player Character) inside a brutal and open-world video game.

Free Guy is directed by Shawn Levy and is based on a script by Matt Lieberman and Zak Penn.

As you can see in the promo above, the upcoming film will star Ryan Reynolds, Jodie Comer, Joe Keery, and Lil Rel Howery as well as Taika Waititi and Channing Tatum.

Free Guy will come to theaters on July 3, 2020 and the trailer will debut tomorrow.

Are you excited to see Ryan Reynolds join the Disney family thanks to his upcoming film Free Guy? Let us know in the comments.