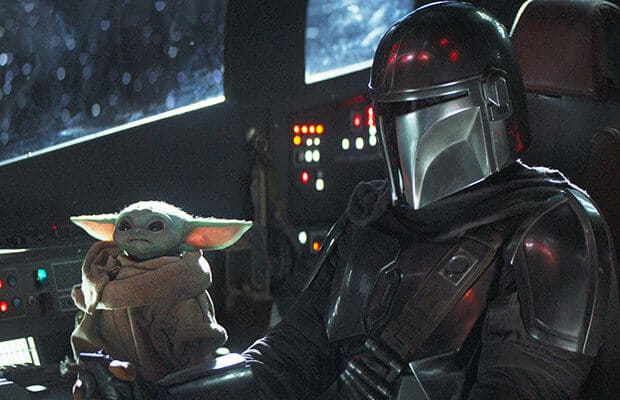 What’s an actor to do when there’s no real Baby Yoda? While doing voice work for Disney plus, (we’re obsessed with the news of the October Mandalorian season 2 premiere!) The Mandalorian voice, Pedro Pascal, is using some unconventional techniques to put himself directly into the episode. A Twitter user found a photo of Pascal working at the microphone, and while that may not seem unusual, the image is quite endearing when you examine what’s going on!

This adorable instance is no stranger to the voice actor world. Actors and actresses typically act larger than life at the microphone, dancing, stretching, or even chewing to give the best sound to their character’s voices. Photos of Pat Carroll, the voice of Ursula , shows her face stretching and volume booming as she gave our favorite villain her due. Check out her hands, neck, and jaw totally engaged in the scene below.

Twitter user @Rachael_Conrad, known as Nerd Girl, shared this Star Wars series-based photo a few months ago, but it’s been hopping across our feed and we’re enchanted with Pedro Pascal’s protective nature. Below, view the tweeted photo that shows Pedro Pascal, sans Mandalorian armor, voicing a scene for the first season of The Mandalorian, cuddling a pillow. This pillow is taking the place of The Child, commonly known as Baby Yoda. Nerd Girl captions the photo, “May this picture of Pedro Pascal holding a pillow in place of baby Yoda while doing voice work for The Mandalorian be a blessing upon your Twitter feed.” Another user photoshopped Baby Yoda into the bounty hunter’s hands, but the lack of scale is also causing we star wars fans to giggle.

How sweet is this? We already know The Mandalorian warrior (Din Djarin) has a soft spot for this Emmy-winning bundle of bounty, toting him across the galaxy as he continues his missions. But to see actor Pedro Pascal protecting this fluffy pillow while in-studio (in no danger whatsoever), just melts our heart. May it be a “blessing upon your Twitter feed…” now and forever.

Find Season two of The Mandalorian streaming on Disney Plus this October 2020, with plenty of easter eggs from the Skywalker series. There’s also a bounty of The Child merchandise to shop for while you prep your viewing experience.

Leave us a comment below with your thoughts on Pascal’s acting technique or if you are watching the second season of creator Jon Favreau’s Lucasfilm series!