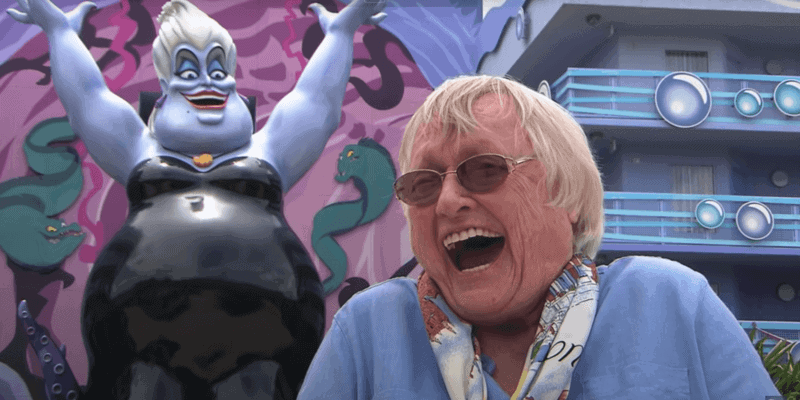 “What I want from you is… your VOICE!” The voice of Ursula will be permanently etched in our minds as the perfect embodiment of a Disney villain. Voiced by Pat Carroll, Ursula made her Disney debut in 1989 as the tricky villain in The Little Mermaid. Pat Carroll was born on May 5th, 1927 in Shreveport Louisiana. The diminutive American actress is only 5’2″, but packs a punch with her iconic voice and distinctive laughter.

We’ve unearthed some gems starring Carroll’s voice reading over lines from The Haunted Mansion, a re-reading of The Little Mermaid scenes, and captured life lessons from her mid-2010s interviews.

Pat Carroll was originally from Louisiana but moved to Los Angeles at age 5 and began acting in local productions as a youngster (Carroll recalls her mother telling her to call the theatre herself at age 13 to ask for a role! She continued to value this lesson to ASK for what she wanted!). She attended the Catholic University of America after enlisting in the US Army as a civilian actress technician.

As soon as 1956, Carroll earned fame by picking up an Emmy Award for her episode work in one of the variety shows, Caesar’s Hour. Shortly thereafter, she was cast as one of the wicked stepsisters, “Prunella,” in the 1965 Cinderella alongside Ginger Rodgers and Leslie Ann Warren. Can you recognize her in the blue dress?

Throughout the 1960s, 70s, and 80s, Carroll maintained her performance work on television shows as well as in Shakespearean theatre and won a 1980 Grammy Award for her work in Gertrude Stein, a one-woman show. As accomplished as her resume was becoming, Pat Carroll always had her eye on Disney.

Ever since seeing Snow White and the Seven Dwarfs (her favorite Disney film) for a quarter, she had seen every offering Disney had put into the theatres. “I had wanted all my life to work in a Disney film. So when I was contacted by the agent and he asked if I would like to audition I said “That’s an answer to prayer. Of course, I would!” She tested three times for voicing and three times for singing, and yet she didn’t hear back from the production team.

She thought she didn’t get the role, but nearly a year later, the phone rang. Carroll remembers them saying they had another actress begin the project, but it wasn’t working out and asked Carroll to take the role. She said, “I would crawl on my hands and feet to do it, she loved Disney so much. How many times do you get to act way over the top?” In interviews, Carroll has continued to refer to the role as one of the favorites of her career.

Pat Carroll recorded her famous voice for Ursula’s lines and songs in the late 1980s, which are even to this day used in Theme Park attractions, game shows, video games, and other productions such as nighttime spectaculars. Carroll continues to lend her pipes to Disney’s recording studios when Ursula is needed, though she is now in her 90’s.

When asked what makes Ursula one of the most famous and favorite of all Disney Villains by the Disney Parks Blog, Carroll responded,

“‘Cause she’s so pushy. [laughs] It’s the truth! She is physically bigger than life, but she’s bigger than life in her head, in her voice, in her laughter, and in her meanness. She’s a mean old thing! I think people are fascinated by mean characters. There’s a fatal kind of distraction about the horrible mean characters of the world because we don’t meet too many of them in real life. So when we have a chance, theatrically, to see one and this one, she’s a biggie, it’s kind of fascinating for us.”

Carroll even slipped off her chair in the screening room the first time Ursula came onto the screen. “That old girl was mighty scary. I was overcome with the movie. That is a Broadway score. The overwhelming finite work. The sea scenes were epic.” Pat recalls. “I thought the music was so wonderful. I knew what was going to happen when Ariel comes up for the hug at the end […] I will be in the theatre when this happens.”

Nearly a decade ago Pat Carroll visited the Spooky Empire’s May-Hem Convention in Orlando (2013). Her presence drew quite a crowd to the panels, including attendees cosplaying Ariel, Ursula, and Vanessa in various garb. Using her iconic Ursula voice along with her own magical intonation, Pat Carroll read The Ghost Host’s lines from The Haunted Mansion script with her own style.

Returning to Spooky Empire’s May-Hem for the second consecutive year (2014), the voice of Ursula, Pat Carroll, appeared in front of a crowd of hundreds to talk about her longtime career and – of course – have a little voice acting fun. This time, Carroll lent her talents to Madame Leota’s famous lines from The Haunted Mansion. Carroll is lots of fun and quick to quip with her interviewers.

The Spooky Empire’s May-Hem 2013 event also included another Disney touch where Pat Carroll dusted off her favorite roles and read lines in character alongside a fairly impressive voicing of Ariel by another convention attendee. While some of the lines are delivered differently by Carroll, the pushy sea witch villain is still present and adored by all.

The end goal of Pat Carroll’s career was always to entertain others and have a ball doing it. “it’s a job of sharing as a performer with audiences everywhere… I don’t think if you don’t have the right heart, you won’t last very long… You have to have the spirit of taking care of each other. What’s better than enjoying laughter together?” I think she’s succeeded!

Which of Pat Carroll’s projects is your favorite? Leave us a comment below!