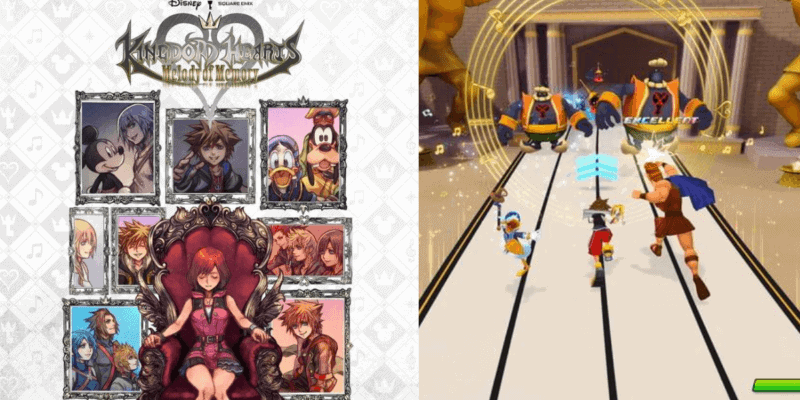 One of the most memorable components of Kingdom Hearts is the amount of Disney songs that are included. Hercules’s World has “Olympus Colossium”, Steamboat Willie’s World has “Steamboat Willie” playing in the background, and Ariel’s World in KH1 was all about Little Mermaid Songs.

KHMM is a new game that is coming to Playstation4, Xbox One, and Nintendo Switch on November 13, 2020. This new game in the Kingdom Hearts series is a rhythm action game by Square Enix (the original producers of the other games).

Illustrated by series director Tetsuya Nomura, we’re proud to present the brand-new key art for #KingdomHearts Melody of Memory, coming to #NintendoSwitch, #PS4 and #Xbox One on November 13, 2020!

How many of the scenes behind Kairi do you recognize?

It seems that there might possibly be a mode where we can use Kairi instead of Sora as the cover art that was posted shows Kairi sitting in the main chair instead of Sora.

The King and the Queen #KingdomHearts ?️?? pic.twitter.com/xDMmXEGjNf

KHMM was first announced earlier this year with a trailer that pointed out some gameplay within the new game itself. You will be able to see familiar characters of Sora, Goofy, and Donald with special characters such as Aladdin, Hercules, Organization 13, and so many more.

How is KHMM different from the other games?

The biggest difference of this game is that there is a sense of Tap Tap or Dance Dance style instead of a strategy game with a long time told story.

What else is going on in the Kingdom Hearts world?

With rumors of a Disney+ tv show of Kingdom Hearts and a board game it seems that Kingdom Hearts III was not the complete end of the franchise. After the completion of the 13 video game series it is not the end of our adventures with Sora and Kairi.

Even though a lot of fans were broken with the release of Kingdom Hearts III, it seems like Kingdom Hearts: Melody of Memory will be a new take on revisiting the worlds that Sora encountered on his travels with Goofy and Donald.

How do you feel about this new style of Kingdom Hearts? Do you think Square Enix and Disney are pushing the franchise too far? Let us know your thoughts in the comments!