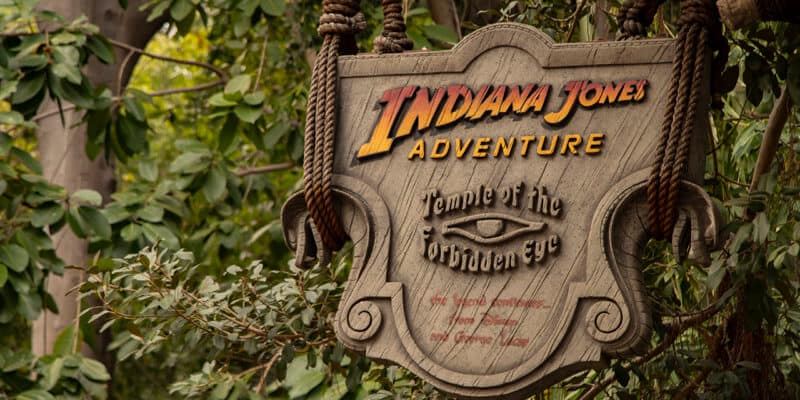 Indiana Jones Adventure is one of the most beloved attractions at Disneyland Resort — and there are a lot of rides at Disneyland and Disney California Adventure. Last year, it was announced that it would undergo a lengthy, much-needed refurbishment…but what can we expect from the refurb, and is it still happening at this Disney Park?

If you remember all of the hype for Star Wars: Rise of the Resistance when the state-of-the-art attraction opened in January 2020 at Star Wars: Galaxy’s Edge, it is said that quite a similar reaction was felt for Indiana Jones Adventure when the ride opened in 1995 (and, perhaps not so coincidentally, both attractions are themed after Lucasfilm IP). It’s been well over two decades since Indy opened at the Happiest Place on Earth, and it continues to be one of the most popular rides to this day.

However, just over a year ago, Disney officials shared that the Adventureland attraction would undergo some renovations (which many argue are for the better and well-deserved). Here’s everything we know about the scheduled refurb and when we think the attraction will finally reopen at Disneyland Park.

Indiana Jones Adventure is a fan-favorite ride at the Happiest Place on Earth. Themed after the Lucasfilm Indiana Jones film franchise starring Harrison Ford, there is so much to love about this Disney Park attraction and its rich, decades-long history (with plenty of ups and downs). Below is the official attraction description, courtesy of the Disneyland Resort website:

Know Before You Go
Indiana Jones Adventure is neither a roller coaster nor a typical slow-speed attraction like Haunted Mansion. You’ll board a 12-person vehicle for a fast-paced thrill ride that realistically simulates quick driving over rough terrain.

In late 2019 — months before Disneyland and Disney California Adventure began their temporary closure as a result of the ongoing pandemic — the Orange County Register shared that, according to Disney officials and a recent permit, Indiana Jones Adventure would undergo a refurbishment in 2020.

The perpetually collapsing bridge traversing a perilous molten lava flow in the crumbling Temple of the Forbidden Eye will finally get repaired after nearly a quarter century when Disneyland’s Indiana Jones Adventure attraction undergoes a renovation in 2020.

Disneyland filed a building permit with the city of Anaheim for a $300,000 overhaul of Indiana Jones Adventure, according to city records.

It’s no surprise that the attraction was scheduled to undergo a lengthy refurbishment. The Indiana Jones-themed ride, although a Guest favorite for decades, experiences more than its fair share of breakdowns and issues in any given week at the original Disney Park. Many Guests and longtime fans of the attraction note that it has been quite a long time since every effect worked properly (and its sister attraction, DINOSAUR at Disney’s Animal Kingdom at Walt Disney World in Florida, is plagued by similar issues).

Toward the beginning of 2020, a Disney fan and Reddit user u/relavis took to the Disneyland Subreddit to share “a comprehensive list of every effect that is currently broken/malfunctioning/damaged,” at the time the post was published. As a warning this list is labeled under the “Not Safe for Magic” category on r/Disneyland, so only read ahead if you are willing. Otherwise, just scroll to the next section of this article.

Was the Indiana Jones Adventure refurbishment postponed, or is it finished?

Per the original announcement of the refurbishment, Disney never revealed when exactly the ride renovations would take place. Indiana Jones Adventure celebrated its 25th anniversary at the theme park in March, and the OC Register reported that the refurbishment could take place after then (or before, but that we soon discovered that never happened). However, the ride was operating (with the occasional breakdown) throughout early 2020, leaving many Guests wondering when they would be able to experience it after all of the improvements were made.

Keep in mind that after the California Disney Parks began their temporary closure in mid-March, all construction was put on hold. Later on, though, construction crews came back to the theme parks and were able to work on projects like the refurbishments of Snow White’s Scary Adventures, Haunted Mansion, and King Arthur’s Carrousel, as well as the construction of new projects like Avengers Campus in Disney California Adventure and Mickey & Minnie’s Runaway Railway in Toontown. But where did that leave Indiana Jones Adventure? There is a chance that the refurbishment was postponed, though nothing is for certain.

Not much chatter was circulating the web when it comes to the Indiana Jones ride. The attraction is so tucked away in Adventureland that aerial cameras don’t often catch whatever is happening with the ride. And while many suspect that the refurbishment is still in the works and planned, some are a bit wary, and others theorize that it will take place later in 2021. Note that, currently, no attractions are listed as under refurbishment on the Disneyland Resort official website. At the time of this article’s publication, Disney has not officially shared any updates about this attraction’s refurbishment since it was initially announced a year ago. So, for this ride, anything goes.

When will Indiana Jones Adventure reopen?

So, when will Indiana Jones Adventure reopen? There could be a few different factors at play here.

First — and most obvious — Disneyland is currently closed. The theme park will not be allowed to reopen until COVID-19 cases significantly decrease, according to the current guidelines enacted by California Governor Gavin Newsom. So, if Disneyland reopens sometime in 2021 and all of the usual attractions are operating, then we can expect Indiana Jones Adventures to reopen, too. If the attraction is still under refurbishment, though, or if it takes a bit longer for Disneyland to reopen the ride for whatever reason, we may not be able to experience it ASAP.

However, there is something to consider. There is a chance that, when Disneyland Park reopens, some attractions will not. For example, many fans (including David at FreshBaked on YouTube) have noted that Finding Nemo Submarine Voyage will very likely not reopen in the pandemic era — or perhaps will never open again. The submarines are a prime example of an attraction that packs Guests into such a tight space that it is nearly impossible to distance oneself from another party. And since we now live in a time when the spread of disease is much more of a concern, health officials, the State of California, and even Disney may not be inclined to reopen an attraction with such little air circulation.

In conjunction with this, it is entirely possible that Indiana Jones Adventure will not be allowed to reopen as soon as Disneyland reopens. While part of the attraction queue is outdoors, a lot of it is indoors and quite close quarters. Depending on the status of COVID-19 transmission in Southern California when Disneyland is allowed to reopen, and depending on theme park reopening guidelines at that time, there is a chance that indoor attractions with queues that do not allow for much distancing will not reopen in the first phase of Disneyland reopening. That is speculation, however, and we won’t make any assumptions until a reopening date is announced for the Disneyland Resort theme parks (and, therefore, the attractions they house).

So, what do you think? Do you have a theory about what’s going on with Indiana Jones Adventure? Let us know in the comments.