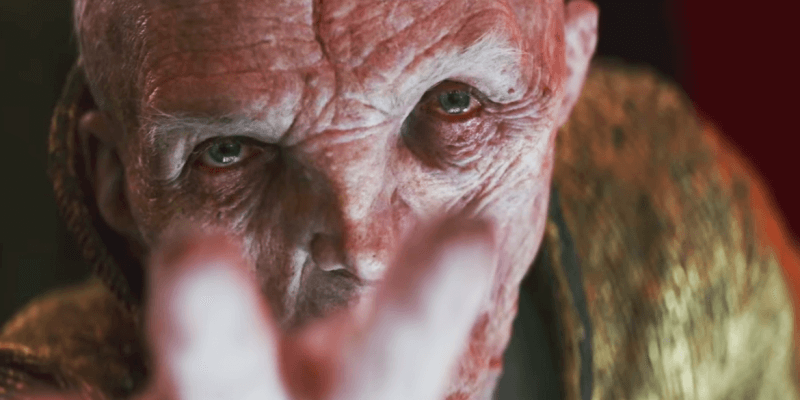 One of the most befuddling plot points of all was the mere existence of Supreme Leader Snoke (Andy Serkis), a humanoid who served little purpose aside from dying at the hands of Kylo Ren (Adam Driver) so Kylo — the former Ben Solo, son of Han and Leia — could assume the position of Supreme Leader himself.

Something almost everyone agreed on, though, was the fact that Snoke’s deformed features strongly resembled a grotesque version of another Star Wars character — the iconic Grand Moff Tarkin (Peter Cushing).

Although Cushing himself only appeared in Star Wars: Episode IV – A New Hope (1977) as Darth Vader’s righthand man, the character made a huge impression and a CGI version of the late actor was inserted into Rogue One: A Star Wars Story (2016).

Wilhuff Tarkin has also appeared in a number of other canon materials, including Dave Filoni’s animated series Star Wars: The Clone Wars and Star Wars: The Bad Batch.

Now, Snoke’s character designer and lead sculptor, Ivan Manzella, has confirmed that Cushing was, in fact, his inspiration when he created the Supreme Leader. During an interview with the Force Material podcast, Manzella shared:

“JJ [Abrams] mentioned a Hammer ‘House of Horror’ doll. So I based him on Peter Cushing… when I did the maquette, there are elements in the cheekbone and profile…It wasn’t meant to be Cushing, but he was my Hammer reference.”

After The Force Awakens hit theaters, Star Wars fans were desperate to figure out Snoke’s backstory and a popular theory at the time was that the antagonist actually was Grand Moff Tarkin, since his death was assumed, but not explicitly shown, in the original trilogy. As one article about the theory noted:

Other details that encouraged fans to look deeper included Tarkin’s military background, his experience with Darth Vader — which would have given him unique insight into Kylo Ren — and his obviously burnt and scarred body, which could have been a result of the Death Star’s destruction.

On top of that, after the new trilogy of films concluded, The Star Wars Book included an entry on Snoke that gave details about the character’s canon background. The book expanded upon Snoke’s role as a figure created by Palpatine, saying, “Snoke has free will, but his actions and goals are still orchestrated by Sidious.”

As it turns out, of course, Snoke isn’t actually Tarkin — and new details about Snoke’s origin continue to emerge thanks to Jon Favreau and Dave Filoni’s Mandalorian saga — but, nonetheless, it is intriguing to learn that fans’ observations about the resemblance between the military leader and the Supreme Leader were not misplaced.

Have you always seen the similarities between Tarkin and Snoke?