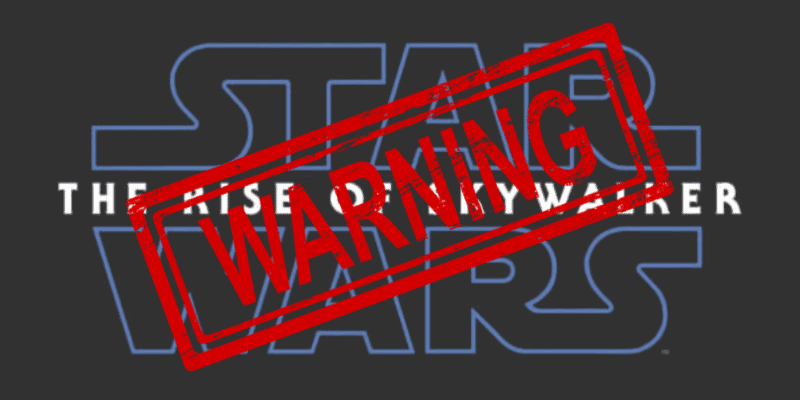 As the world prepares for the release of Star Wars: The Rise of Skywalker, Lucasfilm’s parent company, Disney, issued a warning that the film may cause epileptic seizures.

In a statement sent out to all theater owners, Disney said:

“Out of an abundance of caution, we recommend that you provide at your venue box office and online, and at other appropriate places where your customers will see it, a notice containing the following information: Star Wars: The Rise of Skywalker contains several sequences with imagery and sustained flashing lights that may affect those who are susceptible to photosensitive epilepsy or have other photosensitivities.”

This is an extremely uncommon warning to be released, but nonetheless an appreciative one. Around three percent of people who suffer from epilepsy are prone to seizures triggered by flashing lights of a certain intensity. The most common example is a strobe light or similar effects. In the case of The Rise of Skywalker, those effects will most likely take the form of rapid blaster fire, lightning bolts, and lightsaber flashes. But Disney has not released official accounts of the sequences in question.

Related: “Star Wars: The Rise of Skywalker” will have LGBT+ representation

Disney is Partnering with the Epilepsy Foundation

We appreciate Disney proactively putting out information about STAR WARS: THE RISE OF SKYWALKER containing several sequences with imagery and sustained flashing lights that may affect those with photosensitive epilepsy. Find tips for staying safe: https://t.co/RozkzfQkSc pic.twitter.com/JrPsl2EDpq

To help get the word out and ensure that everyone can enjoy the movie safely, Disney partnered with the Epilepsy Foundation. Here is their official statement:

The Walt Disney Studios and the Epilepsy Foundation are working together to advise photosensitive viewers to use caution when watching Star Wars: The Rise of Skywalker. The film contains several sequences with imagery and sustained flashing lights that may affect those with photosensitive epilepsy.

We thank Disney for reaching out to us and proactively providing information to movie theaters and moviegoers in advance of the movie’s release. If you or someone you know are sensitive to lights, please consider the following as you make plans to watch the movie:

• Ask a friend to watch the movie first.
• Take your friend with you when you go see the film to alert you to which scenes contain the flashing lights so you block your eyes during those scenes.
• Teach your friend the three simple steps of seizure first aid — Stay, Safe, Side — so that they can assist if you have a seizure.

For about 3% of people with epilepsy, exposure to flashing lights at certain intensities or certain visual patterns can trigger seizures. This condition is known as photosensitive epilepsy and it’s more common in children and adolescents.

To learn more about photosensitive epilepsy, including what you can do if flashing lights bother you, please visit www.epilepsy.com/photosensitivity.

In 2018, Disney faced criticisms for failing to issue this warning to moviegoers when Incredibles 2 was released. It seems that Disney has learned from its mistakes and is putting its best foot forward for one of the most highly-anticipated films of the year.

Do you or anybody you know suffer from epilepsy? What tips would you give the Star Wars fans at risk of getting a seizure? Let us know in the comments!