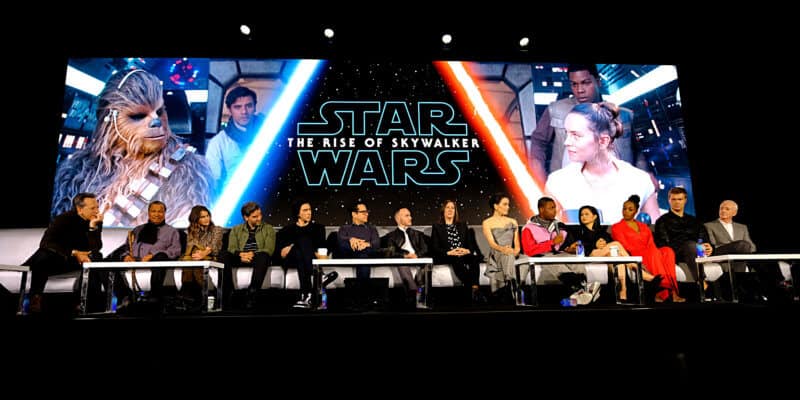 Star Wars: The Rise of Skywalker premieres in just a few weeks, and it’s safe to say that the hype is very real. And while fans are — to say the least — interested in seeing Episode IX, we’re all pretty much wondering the same thing: how will the Skywalker Saga finally come to an end?

Well, according to the team behind the film, this truly is the end of the Saga…or at least, it’s the end because they decided it was.

The Rise of Skywalker producer Michelle Rejwan and writer Chris Terrio spoke about giving closure to the characters and story of the new Star Wars film during this week’s global press day for the Episode IX. And during their conversation, they shared that providing an ending for this trilogy — and the nine films in the saga — was intentional and important.

“We really worked very hard to make sure that every character had an arc,” said Rejwan, who, in addition to being the film’s producer, is also the Senior Vice-President of Live Action Development and Production for Lucasfilm. “It was very important to us because we’re so invested and care so deeply about these characters that we spend, in some cases, two movies with, in some cases, you know, more than that, obviously. And then the new characters that we wanted to be relatable and grounded in their own right, and rooting for them and caring about them with the space that we had. But it was something that we talked about quite a bit.”

“I think Michelle and I both feel like the first 10 seconds or 30 seconds you spend with a character is the moment when you bond with a character,” said Terrio. “Think about the first moment you meet Lando, where, you know, he walks up to Han. And then the minute that you realize he’s actually going to hug him, you fall in love with Lando. And so we were really careful about the entrances of our new characters and then just trying to make you bond with them right away.”

Later, Terrio continued to elaborate on why he — along with Rejwan, director J.J. Abrams, head of Lucasfilm Kathleen Kennedy, and the rest of the creative team — decided to end this film the way they did.

“We want everyone’s arc to feel complete in this film,” Terrio said. “I mean, there are plenty of existing characters and characters in this that of course I would totally sit and watch a series about. But we didn’t really have those conversations because we felt like everyone has to get to the place where they need to be at the end of this movie.”

Terrio continued,”The ending of a story depends on where you stop telling it, which is a big meta idea for us because whether it’s a happy ending depends on where you stop telling it…And that was a thing that we talked about a lot in the new film, because the original trilogy ends, it has a happy ending. But then as soon as we go into  The Force Awakens, and you realize that the galaxy’s still a bit messed up and the First Order has arisen, then the story hasn’t quite ended yet. And so we wanted to give a somewhat definitive ending for Episode IX, even though, sure, if we kept on telling it I’m sure it would go in different directions.”

So it would seem as though  Star Wars: The Rise of Skywalker is ending in this way not because this is the absolute end-all film for these characters, but because the team decided collectively that they wanted to give a suitable and natural yet remarkable ending to this story. As Terrio puts it, this didn’t have to be the end if they decided it wasn’t the end. But as he and Rejwan shared, they truly wanted to give every character a full and complete arc. And it sounds like they did just that.

We’re going to have to wait until  Star Wars: The Rise of Skywalker hits theaters on December 20 to find out what Rejwan and Terrio are talking about when it comes to the end of this film. But it’s safe to say we — along with the rest of the Star Wars fan community out there — couldn’t be more excited.

What are your predictions for how The Rise of Skywalker will end? Share your thoughts with us!

Comments Off on Every character’s story comes to a close in “Star Wars: The Rise of Skywalker”