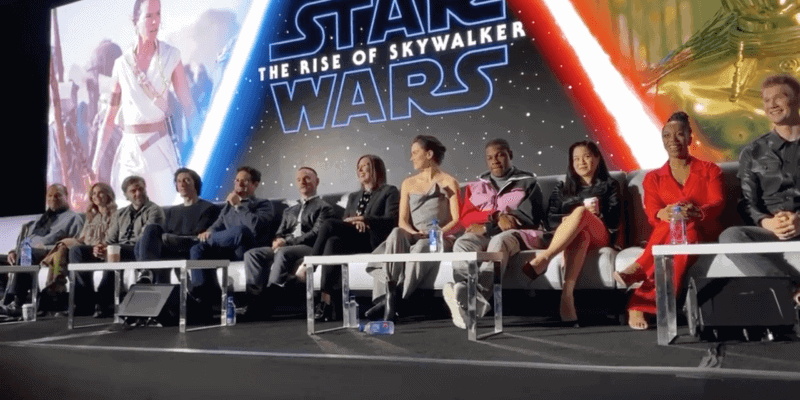 Today, J.J. Abrams and the entire cast of Star Wars: The Rise of Skywalker met for a press conference. Yes, everyone.

One cast member was physically absent, the legendary Carrie Fisher. But it appears she disproved that theory in a funny yet chilling way. While director J.J. Abrams answered a question about the late actress, stage lights suddenly turned on and off. His response: “Hi, Carrie!”

It began with one attendant pointing out the Wookie in the room: What was it like working to fit Carrie Fisher into the movie? Abrams had this to say:

“Obviously, as we discussed the idea of continuing this story without Leia wasn’t a possibility, and there was no way we were going to do a digital Leia. There was no way we were, of course, ever recast her, but we couldn’t do it without her. And when we went back to look at the scenes we hadn’t used in The Force Awakens, what we realized was we had an opportunity. And we could use the lines she said even the lighting–“

As soon as Abrams said “lighting,” a large section of stage lights went out. Everybody was caught off guard, and in the midst of nervous laughter, Abrams said, “Hi Carrie. That’s so Carrie, by the way, to do that.”

Getting the conversation back on track, Abrams tackled the fan-obsessed “What if?” confirming that, of course, if Carrie had been alive, they might have done things differently. But at the same time, he ultimately shut down the question of “what if she was still alive?” because, in many ways, she was still alive. He said, “we had been editing with her for about a year, and she has been very much alive with us in every scene.”

Related: Daisy Ridley on the legacy she wants to leave after Star Wars

But at the end of the day, there is a confidence that we will see Leia in a role that Carrie, herself, would be happy to play: “We were able to–I think–do something that Carrie herself–I like to think–would be happy with.”

“She’s great in the movie,” Abrams concluded, “and it’s still emotional and moving to think of her and how sad we all are that she’s not up here sitting with us today.”

Star Wars: The Rise of Skywalker opens in theaters on December 20.

Do you think Carrie’s ghost shut off the lights? Are you excited to see her in this last role? Let us know in the comments!