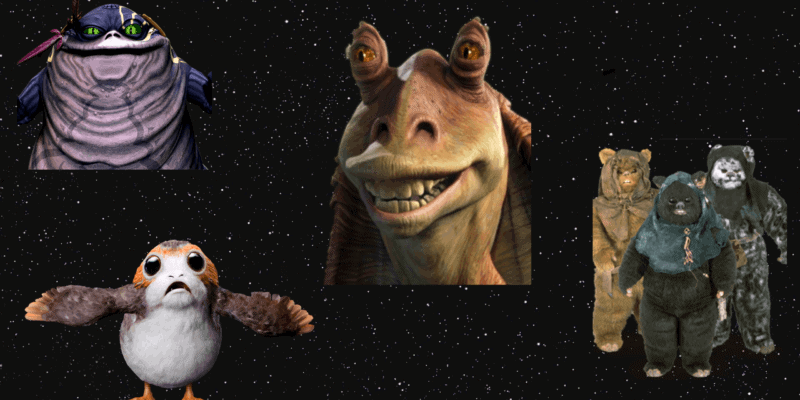 While Jar Jar Binks is often considered by many as the most annoying Star Wars character in the history of the franchise, I am here to say that he is far from the worst character that we’ve seen on our screens over the years.

I want to point out before I start with the list, I am by no means defending Jar Jar Binks, he still remains as one of the worst characters in the franchise though he is redeemed a lot during the events of the Clone Wars TV show.

Let’s take a deeper look at the most annoying characters from the Star Wars universe and see if other Star Wars fans agree.

I thought I would start off this list with what I know is going to be the most controversial, The Porgs. I know they’re a collective rather than just one character but they really added nothing to the events of The Last Jedi other than a cheap attempt at trying to add humor into what is perhaps one of the darkest stories of the Star Wars saga.

None of the jokes really land and it’s clear they were invented to sell merchandise. The original plan was to simply use them to cover up the real-life Puffins that inhabited the island where much of the movie was shot.

Related: What order you should watch the entire collection of Star Wars films and television shows

Though played by the wonderful Brian Blessed, Boss Nass is a bit of an odd character. Many of his decisions made throughout the events of The Phantom Menace are questionable at best and his voice is perhaps even more annoying than Jar Jar Binks.

Also… why doesn’t Boss Nass look like the rest of the Gungans? It’s very odd that this Gungan looks different to the rest of his species.

I might get more abuse for this one than the Porgs, but the appearance of the Ewoks in Return of the Jedi was the first sign that series creator George Lucas couldn’t always get things right.

The question still remains of how the Ewoks were able to defeat an entire platoon of Imperial Stormtroopers (although this perhaps means questions need to be asked of the training of Stormtroopers). And the entire scene where C-3PO becomes some form of God to them thanks to a bit of Force trickery by Luke Skywalker is just so cringy.

Having a Forest setting for the final movie was a stroke of genius that showcased just how big the galaxy is, the Ewoks on the other hand, I could live without, despite an excellent performance from a young Warwick Davis.

Related: How to spend Star Wars day at home

Now I couldn’t possibly include Boba Fett as an adult on my list as he remains one of the coolest characters in the Star Wars franchise. But in his younger years, he becomes obsessed with revenge against Mace Windu and struggles to grow as a character, often coming across as a whiney brat.

He wasn’t well used in Attack of the Clones or subsequent episodes of The Clone Wars.

Perhaps the Star Wars character with a voice even more annoying than Jar Jar Binks, Ziro’s death in The Clone Wars was one that very few fans mourned.

While it made a lot of sense to introduce more than one Hutt (he’s related to Jabba the Hutt) into the Star Wars timeline, Ziro doesn’t ever come across as a serious threat.

In fact, it was another misstep from series creator George Lucas who wanted the voice of the character to sound like Truman Capote:

A few others that I find a little irritating include Salacious B. Crumb, Watto, Nute Gunray, and C-3PO, but I won’t go into detail on them for fear of even more angry fans in the comments. You can also see that there are annoying characters across the original trilogy as well as the prequel trilogy and even the more recent movies.

What annoying character from the Star Wars franchise do you find more annoying than Jar Jar Binks? Let us know in the comments below!