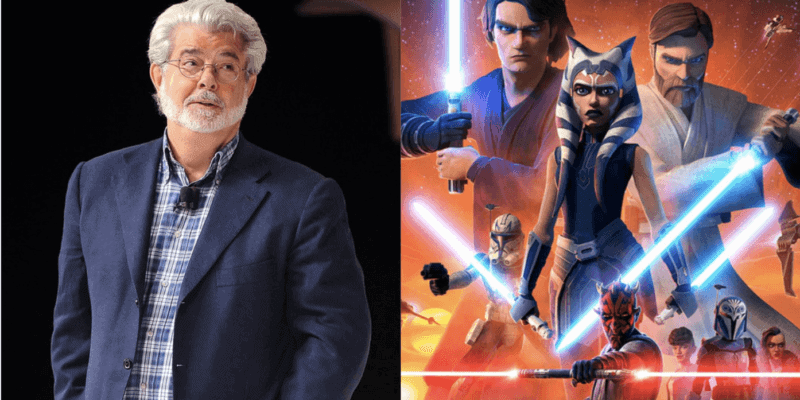 After seven seasons, Star Wars: The Clone Wars is appropriately set to come to an end on May 4th, Star Wars Day. In many ways, the Clone Wars series finale is the end of an era for Star Wars fans.

Star Wars: The Clone Wars is the final Star Wars series that George Lucas created, so once the final credits roll, Lucas’s sale of Lucasfilm and, thus, the rights to the Star Wars universe, to the Walt Disney Company may feel even more real to U.P.Fs (ultra-passionate fans).

Witwer stated, “George [Lucas] has been calling Dave [Filoni] and giving him nice little comments on the episodes. I really, really hope we get some positive feedback from the maker himself when this comes out. This show has such a special place in George’s heart. He was so happy when he was making this show, and we were so happy to be implementing it for him…you really did just get a directive from George, and that directive got discussed and translated by Dave Filoni, and then it went right to the actors, animators, lighters, everything. It just got done.”

“That’s the fun of watching the Siege of Mandalore, because it just feels pure in its intention… It’s so cool that this is the last George Lucas produced Star Wars. The last Star Wars that has George’s fingerprints on it. I truly loved to hear that George was reacting well to [the final season of The Clone Wars]. And I’m happy to hear that he likes how Clone Wars is going so far this season and I really hope he likes our finale because that’s where it all counts.”

Witwer’s passion for the final season of the hit animated Star Wars shows is palpable in his comments and we’re excited to see exactly how the “Siege of Mandalore” story arc plays out. If George Lucas’s thoughts on the Clone Wars final season are any indication, fans have a lot to look forward to.

What’s next for Star Wars on Disney+?

The odds are good that producer, Dave Filoni, who is also heavily involved in The Mandalorian, will use some pieces of the story to tie together the two Star Wars Disney+ series. In the Star Wars timeline, the Siege of Mandalore occurs during the same time period as the 2005 film, Star Wars: Episode III – Revenge of the Sith.

It has already been confirmed that Ahsoka Tano will appear in the upcoming Season 2 of The Mandalorian. Furthermore, we could see an appearance by The Death Watch. This pacifist Mandalorian splinter group played a major role in the infamous Siege of Mandalore and ultimately rescued Din Djarin, who grew up to become the Mandalorian from the hit television show.

For fans who can’t wait for more Star Wars on Disney’s streaming platform, a special Jon Favreau led mini-series that goes behind-the-scenes of The Mandalorian will also be premiering on Star Wars Day 2020.