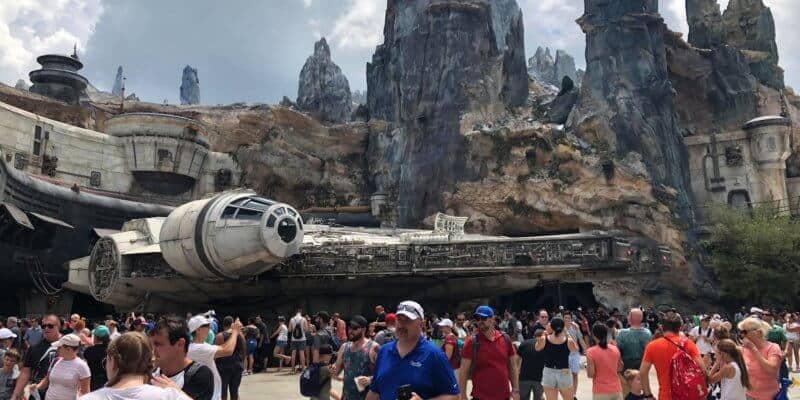 Star Wars: Galaxy’s Edge opened to huge crowds of eager fans at Disney’s Hollywood Studios at Disney World on Thursday. The crowds on Friday didn’t dwindle either, and today looks to be another full day of Star Wars-themed excitement at the new land.

And that’s despite a Category 4-level hurricane barreling toward the Sunshine State.

It doesn’t seem like any of the thousands upon thousands at Disney World to experience Star Wars: Galaxy’s Edge are letting the threat of Hurricane Dorian ruin their chances to pilot the Millennium Falcon, sip on the trademark blue milk or create their own light sabers and droids at Galaxy’s Edge.

“I’m still on the high,” said guest Adrian Vazquez of New Jersey, speaking to Fox news about the thrilling experience he had visiting Galaxy’s Edge for the first time. “I haven’t slept in about 24 hours.”

Visitors to the Planet Batuu at Galaxy’s Edge can not only craft their very own droids and light sabers at specialty shops in the new Star Wars-themed land, but they can also purchase wardrobe pieces from Black Spire Outfitters and dress like a Batuuan and dine on Batuuan fare at Oga’s Cantina.

Now that both the Disney World and Disneyland versions of the Star Wars-themed land are now open and operating, one theme park expert feels that Disney will see a fast profit, and that’s even after purchasing Lucasfilm in 2012 for a cool $4 billion.

“It’s important to the company. It’s one of their most expensive IP [intellectual property] acquisitions,” Dennis Speigel, an industry theme park analyst, told Fox news. “It would be the Harry Potter of Disney.”

On Thursday, enthusiasts for the beloved franchise waited as long as five hours at times to board the famed Millennium Falcon and test their skill sets at piloting the massive spaceship. Other fans stood in long lines to be among the first to sip Coca-Cola from round bottles shaped like “thermal detonators.”

Though he doesn’t appear to be calling the shots at Galaxy’s Edge at Disney World so far, Hurricane Dorian continues to gain strength, being upgraded to a Category 4 storm late Friday evening with sustained winds at 145 miles per hour. Latest models predict the hurricane making a sharp right just after it grazes the northern Bahamas. If the tropical cyclone follows these predictions, Central Florida could be spared a direct hit, and keep the center of the massive storm from making landfall on the state.

Disney World made a weather statement Friday afternoon, but so far, the theme parks have no plans to close their gates just yet, which seems to sit well with Jedis and Siths who’ve waited their whole lives for such an immersive Star Wars-themed experience like that at Galaxy’s Edge.

If you want to plan a trip to Star Wars: Galaxy’s Edge after Hurricane Dorian passes, reach out to the Authorized Disney Vacation Planners at Academy Travel here for a free, no-obligation vacation quote.

Are you in Walt Disney World this week riding out the storm, or are you waiting for your chance to go to the parks after the hurricane passes? Let us know in the comments and stay safe!