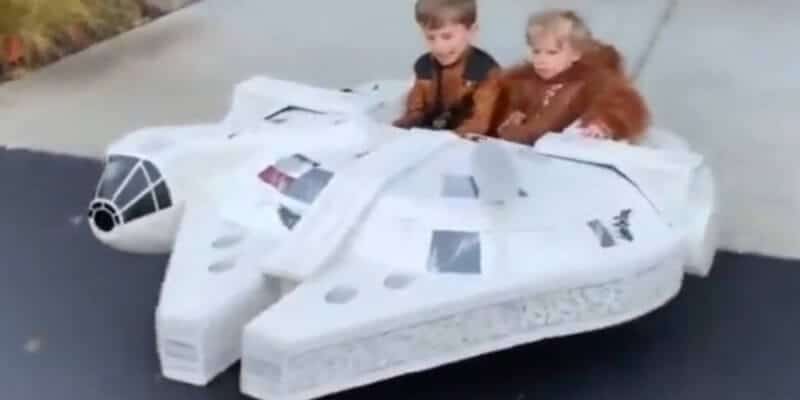 One family in Cincinnati, Ohio, has taken the term “homemade costume” to a whole new level—to a galaxy far, far away, in fact.

Sean Lehmkuhl has been a vintage Star Wars toy collector for more than 20 years, and it was the original Millennium Falcon from the 1977 Star Wars film that inspired the epic costume he constructed for his two sons.

Ok, it’s not really a costume, but you have to admit that a pint-sized Millennium Falcon that actually runs is just about the coolest accessory any Star Wars fan could hope to have when they step out on the town for a fun night of trick-or-treating around the neighborhood. Just check out this video that shows Lehmkuhl’s methodical process of building the famed Falcon, one step at a time.

Both of his sons fit in the cockpit of the tiny cruiser inspired by the spacecraft from the original trilogy. They are able to play in it and ride down the sidewalk inside the epic accessory their dad built for them.

“My kids love it!” Lehmkuhl said during an interview. “I’ve always enjoyed creating things, and to have my kids enjoy it with memories they will never forget makes it worth it.”

The energetic and talented father of two says he built the vehicle during his spare time, and he spent about a month working to create the Star Wars-themed mini-ride from start to finish.

The Star Wars Millennium Falcon was first unveiled when Star Wars Episode IV: A New Hope was released at the box office in 1977. The giant ship was piloted by the over-confident (and slightly annoying) Han Solo, whose character was played by the legendary Harrison Ford. So Lehmkuhl’s sons will be piloting their Millennium Falcon this Halloween as Han Solo and Chewbacca.

No word yet on whether the Star Wars superfan will be using the force to take his two sons to see Star Wars Episode IX: The Rise of Skywalker (the final installment in the story of the original Skywalker Saga) dressed as Han Solo and Chewbacca, but we’re pretty sure that these young fans won’t get past security at the theater if they try to do so with their mini-Millennium Falcon.

There’s no denying that this Millennium Falcon is pretty cool. In fact, it looks like the Lehmkuhl family has one of the coolest costume-accessory-vehicle ensemble we’ve ever seen.

What do you think? Have you seen a more creative Disney- or Star Wars-inspired costume this Halloween season, or does this one take the cake? We’d like to hear from you in the comments section below.