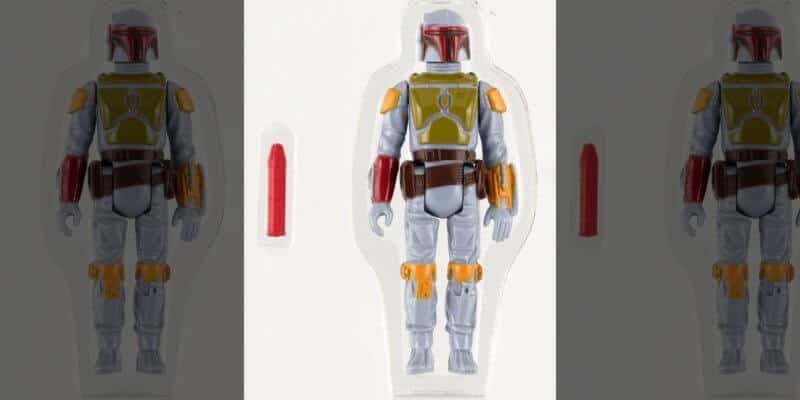 Are you a collector of “Star Wars” toys? If so, you may be sitting on some intergalactic treasure as a “Star Wars” toy from the 1970s is believed to be valued at $500,000 when it goes to auction next month.

Pictured below, is the “holy grail” of Star Wars toys, the “Boba Fett J-slot rocket-firing prototype.” According to SWNS, the toy was never mass produced because of safety concerns. However, somewhere between 80 and 100 of them had been made for testing, but only 24 of them are believed to still be in circulation.

24 toys, which could each be valued at over half a million dollars.

“The design never made it into mass production due to safety concerns about the toy’s rocket-firing mechanism,” Consignment manager Kelly McClain said to SWNS. “For this reason, few prototypes ever made it into collector’s hands.”

McClain says that “because the toys were made for rigorous testing, including heating, freezing and more…Several of the surviving J-slots are in rather rough condition.” However, the one going to auction for a believed $500,000 was not “put through such harsh testing challenges.”

According to Fox News, the prototype will be auctioned November 7 by Hake’s Auctions and will come with two letters of authenticity: one from Kenner’s Reliability and Safety technician, John Howlson, the toy’s original owner. Another will come from Tom Tumbusch of Tomart Publications, who bought it from Howlson in the early 1990s.

For those bummed they don’t have this rare J-slot toy in their collection, don’t fret as there are other “Star War” toys that are believed to be going for large sums of money at this same auction. This includes an Obi-Wan Kenobi and a Darth Vader Figure, each estimated to be worth anywhere between $75,000 and $100,000.

Do you have this “holy grail” J-slot “Star Wars” toy? Let us know in the comments!