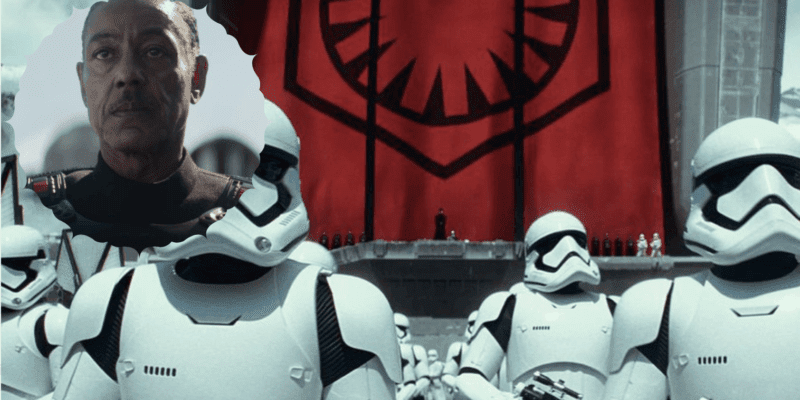 If you’ve ever watched a Star Wars movie, the Empire’s fascist iconography has probably not been lost on you. Much of the costuming, dialogue, and imagery George Lucas and his team used in the original trilogy onward are reminiscent of Nazi Germany.

“The casting director for The Empire Strikes Back knew me. He asked me to meet with Irvin Kershner who, I was told, was making the sequel to Star Wars. I had not actually seen Star Wars at that point, although of course I knew what it was, so I agreed. I remember when I walked into his office, Irvin said to me, ‘I’m looking for someone that would frighten Adolf Hitler!’ And he sized me up and down and continued, ‘Yes, I think you’re it.’” On playing the role, Colley says, “Obviously they were going on some sort of design for Darth Vader’s men — there were echoes of the Gestapo or at least fascism in there — and that was also how I approached the role.”

In the sequel trilogy, the First Order’s fascist ties are apparent, from the way Stormtroopers are completely dehumanized (Finn, you’ll recall, didn’t even have a name until Poe Dameron gave him one) to the uniforms General Hux and his cronies wear.

These photos of General Hux and Kylo Ren’s First Order rally in Star Wars: Episode VII – The Force Awakens compared to an actual Nazi rally with Adolph Hitler in the 1940s throw the Imperial fascist iconography in Star Wars into sharp relief.

Now, The Mandalorian’s Giancarlo Esposito, who portrays Moff Gideon, has spoken out about being a person of color in the Star Wars universe’s fascist Empire. Esposito told Deadline:

“It means a lot to me because I’ve strived in my career to be colorless. I am of mixed race, half Italian, half African American, and I grew through the period of time where I was relegated to playing thieves and thugs. I learned how to do a Spanish accent, to play Spanish street characters, who were murderers, killers, robbers, the like. So for me, it’s a crowning moment when I could get a phone call from Jon Favreau, to say, ‘I wrote a role for you.’”

Esposito continued, talking about how interesting it is to portray a person of color in an Imperial organization that would, in our culture, despise him based solely on the color of his skin:

“Certainly I’m captivated and in wonder and enthusiasm that this character could be, and is, me; someone who has an understanding of what race and status mean here in America and has suffered of that as well.”

“But my Hollywood family has grown throughout the years to become more and more understanding that we are special, because actors are actors, and you don’t have to be a color to play a role.”

Esposito also made a point about fascism, in reality, being more about power than skin color, even though white supremacy has historically played a major role in the ideology. He stated:

“Fascism, communism, for me, can be colorless, because it really boils down to power and money.”

What do you think about fascism in the Star Wars galaxy and Giancarlo Esposito’s role in The Mandalorian? Make sure to tune into Disney+ in October for the debut of The Mandalorian Season 2, where fans can expect Moff Gideon’s Darksaber storyline to play a key role.