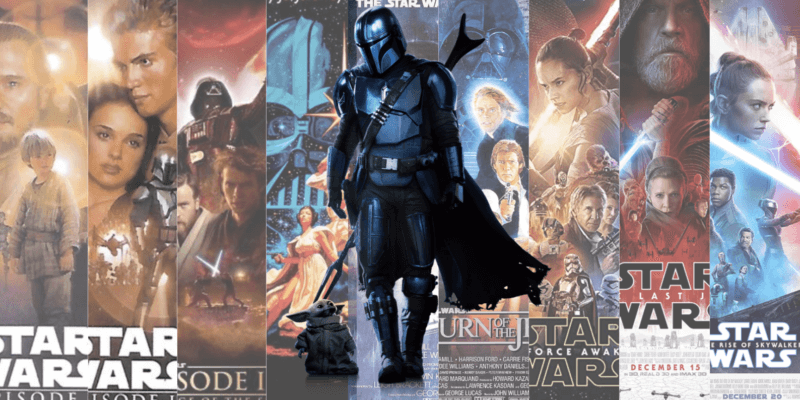 “Star Wars is a fairy tale, a fantasy, a legend, finding its roots in some of our most popular fictions. The golden robot, lion-faced space pilot, and insecure little computer on wheels must have been suggested by the Tin Man, the Cowardly Lion, and the Scarecrow in The Wizard of Oz … The hardware is from Flash Gordon out of 2001: A Space Odyssey, the chivalry is from Robin Hood, the heroes are from Westerns and the villains are a cross between Nazis and sorcerers. Star Wars taps the pulp fantasies buried in our memories, and because it’s done so brilliantly, it reactivates old thrills, fears, and exhilarations we thought we’d abandoned when we read our last copy of Amazing Stories.”

For the next four decades — until Star Wars: Episode IX – The Rise of Skywalker premiered in theaters on December 20, 2019 — the Skywalker Saga continued to inspire and amaze a fandom that is, arguably, more passionate than any other.

Related: ‘Star Wars’ Might Be Trying to Make Mandalorians the New Jedi

There’s something timeless about Star Wars — it resonates with people from every generation and every demographic, all while thrilling us, touching us, and making us question everything we believe to be true (in the best possible way).

Now, though, as the pandemic rages on and people are turning to streaming services with ever-increasing frequency, the magic of the silver screen, while certainly not dead, isn’t the same as it once was.

What does this mean for the future of Star Wars?

The future of Star Wars lies not in its iconic movies, but on the small screen — beginning with Jon Favreau and Dave Filoni’s Disney+ smash hit, The Mandalorian.

When the series — featuring a Mandalorian bounty hunter named Din Djarin (Pedro Pascal) and a tiny green foundling we now know is named Grogu (AKA The Child AKA Baby Yoda) — debuted on the Disney+ streaming platform on its launch date, November 12, 2019, nobody — probably not even Favreau and Filoni — anticipated the level of success it would have.

The pared-down Star Wars show has gotten back to what many fans love about the original trilogy — amazing storytelling, incredible character development, and well-placed action sequences that actually serve a purpose in regard to the overall story arc. These are all things that, one could (easily) argue got away from filmmakers during the Star Wars sequel trilogy, in particular.

At The Walt Disney Company’s 2020 Investors’ Day virtual event, Lucasfilm President Kathleen Kennedy confirmed that “roughly 10” new Star Wars series — including two Mandalorian spinoffs, Rangers of the New Republic and Ahsoka — are in the works for the next couple of years.

Kennedy said that The Mandalorian has ushered in a “new era of Star Wars” and it certainly seems that its one that will take place primarily on the small screen, with Mando at the center of an ever-expanding galaxy far, far away.

As the Star Wars universe continues to expand, we will undoubtedly meet new characters — like those who are certain to appear in The Mandalorian Season 3 and in other upcoming original series within the Star Wars franchise.

However, stories from the Skywalker Saga won’t soon be forgotten and Star Wars fans will continue to learn more about some of the franchise‘s most beloved characters.

One of the things many original trilogy fans enjoyed about the sequel trilogy was that Harrison Ford (as Han Solo), Carrie Fisher (as Leia Organa), and Mark Hamill (as Luke Skywalker) all appeared. My personal favorite sequel appearance? Han Solo in Star Wars: Episode VII – The Force Awakens (2017), of course — just ask anyone who’s ever met me.

Now, we will be treated to a Lando mini-series in which Solo’s favorite frenemy, Lando Calrissian, will share his story. It has not yet been confirmed if Billy Dee Williams — who made Lando famous in Star Wars: Episode V – The Empire Strikes Back (1980) — or Donald Glover — who played Lando in Solo: A Star Wars Story (2018) — will reprise the iconic role.

No matter what, there’s a host of stories left to tell and the small screen is where Lucasfilm has decided to tell them.

I’m certainly not suggesting that there won’t be any new Star Wars movies — as a matter of fact, Kennedy confirmed the next two films during Lucasfilm’s Investors Day segment.

After that, the next Star Wars feature film is slated for 2027.

It does, however, seem that films may begin to play a more supplemental role in the Star Wars universe — akin, in ways, to Rogue One: A Star Wars Story (2016) — enhancing the stories that are being told on the small screen via the Disney+ streaming service.

Only time, of course, will tell for sure, but it certainly seems that the future of one of the biggest film franchises of all time lies on the Smart TV in your living room, not your local multiplex.

What do you think? Is the Star Wars universe now firmly grounded in Disney+?