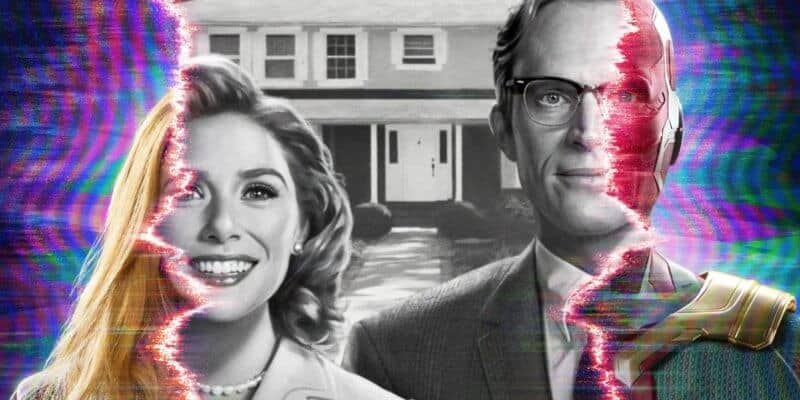 WandaVision will finally debut on Disney+ on January 15, 2021. But, in order to hit that deadline, Elizabeth Olsen (Wanda Maximoff / Scarlet Witch), Paul Bettany (Vision), and the rest of the cast and production crew had to figure out a way to proceed in the midst of a global pandemic.

Recently, Bettany and Olsen sat down with Television Academy and shed some light on what it was like to work during such a time.

“We were on hiatus when shut down happened. We had a sort of planned four-week hiatus (laughs). It was a longer pause than I think any of us could have imagined,” Bettany explained. “They did a brilliant job, Disney and Marvel, at keeping us all safe. We had not one single positive test.”

But while everybody did their part, the new procedures were still difficult to get used to.

Olsen explained that it was “really hard to go from complete calm and in your own space and home to being on set, and then you have all these other things that you have to be thinking of like your mask and your shield.”

But the lead actors agreed that the strangest changes came while on set. What started out as filming in front of a live studio audience quickly turned into a sterilized, locked-down set.

“You’d go on set [and] that shield comes off, and everybody else’s shields go on with the mask,” Bettany explained. “And you do your scene with your partner [before] being whisked away and then put in your sort of hermetically-sealed trailer. There is no hanging around on set. The way you build up camaraderie with your cast and your entire crew — that felt very diminished. And I missed that.”

“It was definitely strange, and I think we found a lot of the humor in it,” Olsen explained. “And it kind of evolved as we went, and you got more comfortable with it.”

Despite the strange changes, WandaVision was able to be completed which Bettany feels is great news for the entire industry.

“To see a way where it could [work] was really comforting and exciting,” he said.

WandaVision is one of Marvel’s new long-form series projects bound for Disney+, along with Loki, and The Falcon and the Winter Soldier. It has also already been confirmed that WandaVision will lead, story-wise, directly into the upcoming feature-length film, Doctor Strange and the Multiverse of Madness.

Are you excited about WandaVision? Let us know in the comments!

Comments Off on ‘WandaVision’ Cast Talks Completing Show Amid Pandemic