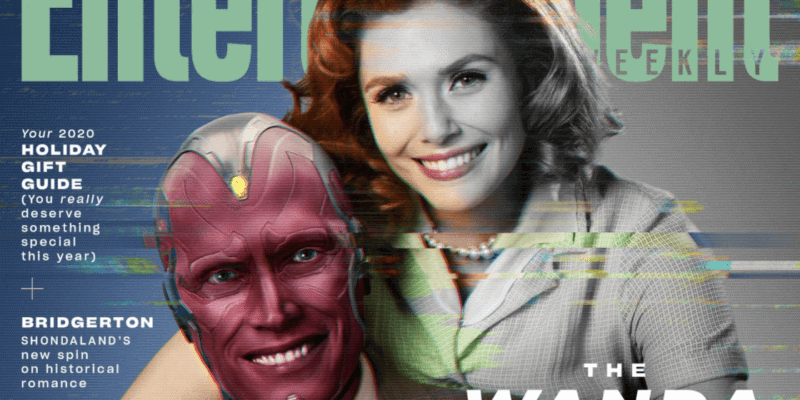 After a long wait — and plenty of pandemic production delays — we are finally getting an inside look at Marvel’s highly anticipated streaming miniseries, WandaVision.

Today, Entertainment Weekly shared four new photos from the series, which will pay homage to the Golden Age of television. All of these scenes featuring Wanda Maximoff (AKA Scarlet Witch) and Vision look like they could have been taken straight from Bewitched or I Love Lucy!

This image gives a glimpse into the superhero couple’s bedroom, which features two beds a la 1950s and 1960s television sitcoms.

This WandaVision sneak peek showcases Wanda’s pregnancy — previous screencaps from the show featured twin babies! Details about this particular story arc, however, have not been revealed.

Finally, we see Wanda apparently cooking dinner with her powers. We can’t wait to see more of Marvel’s ode to classic TV once it debuts!

Don’t touch that dial… #WandaVision is "a love letter to the golden age" of TV, and now Elizabeth Olsen and @Paul_Bettany's strange, sweet adventure with an eye toward the past unlocks @MarvelStudios' next phase. https://t.co/WedfUk8VlJ Story by @devancoggan pic.twitter.com/mzIFEwLNDL

The story itself doesn’t feature a WandaVision release date, but does let fans in on some production details straight from Marvel Studios head, Kevin Feige:

“If you haven’t seen any of them and just want to step into this weird thing because you love The Dick Van Dyke Show, it’s going to work,” Feige says. “But if you’ve been tracking the 23 movies we’ve made and following along the stories into Phase 4, there’ll be a wealth of rewards waiting for you as it all unfolds.”

The official synopsis for WandaVision reads:

“Marvel Studios’ WandaVision blends the style of classic sitcoms with the Marvel Cinematic Universe in which Wanda Maximoff (Elizabeth Olsen) and Vision (Paul Bettany)—two super-powered beings living their ideal suburban lives—begin to suspect that everything is not as it seems.”

This is Marvel’s first foray into a Disney+ live-action series, although additional shows — including The Falcon and the Winter Solider — are slated to debut on the streaming service over the course of the next year or so.

Are you excited for WandaVision to debut?