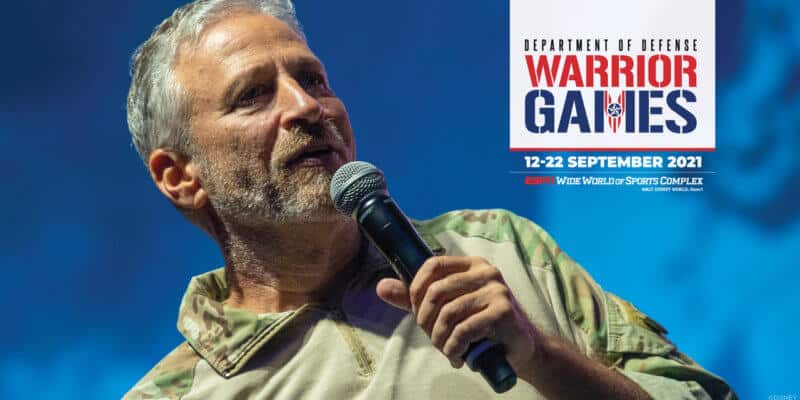 On Monday, June 7, comedian Jon Stewart was a guest on Good Morning America and announced that he would be hosting both the opening and closing ceremonies for the Department of Defense Warrior Games. The games will take place from September 12 to September 22 and will be held at ESPN’s Wide World of Sports Complex at the Walt Disney World Resort.

Disney Parks Blog shared the excitement of Stewart hosting the games, as well as some more information about the Department of Defense Warrior Games themselves.

ESPN Wide World of Sports Complex is thrilled to serve as a DoD Warrior Games venue for the first time, with hundreds of elite athletes set to compete in 12 adaptive sporting events between September 12 and September 22, 2021. Among the sporting events taking place at ESPN Wide World of Sports are sitting volleyball, powerlifting, wheelchair basketball, archery, track, and field.

Hundreds of elite athletes, including those from international allied nations, compete in adaptive sporting events such as wheelchair basketball, cycling, indoor rowing, and wheelchair rugby, among others.
The DoD Warrior Games serve as a way to enhance the recovery and rehabilitation of wounded warriors by providing them exposure to adaptive sports. Participation in the Warrior Games represents the culmination of a service member’s involvement in an adaptive sports program and demonstrates the incredible potential of wounded warriors through competitive sports.

Jon Stewart has been actively involved with helping veterans for years — most notably fighting for a bill to aid 9/11 first responders and bringing attention to service members injured in burn pits while serving in the Middle East.

The Department of Defense Warrior Games will be open to the public and more information will be released as the event gets closer to its opening date.

Will you be attending the Warrior Games at ESPN’s Wide World of Sports in Walt Disney World? Let us know in the comments!