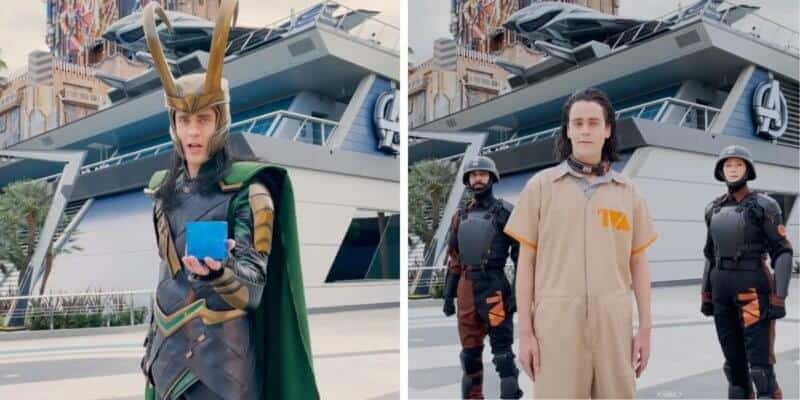 Now that Avengers Campus is open at Disney California Adventure, Guests can step inside the MCU.

Being able to meet fan-favorite Marvel characters every day is an experience many Disney Guests have been waiting for, and one that will seemingly evolve!

Now that Loki has premiered on Disney+, Disney is getting ready to share much more of the Loki IP in its theme parks, presumably specifically at Avengers Campus. One of the coolest additions to Avengers Campus is that Loki will meet in his prison uniform now, as seen in the show!

Just in “time” for the premiere of #Loki on @DisneyPlus, learn how you can celebrate the God of Mischief himself with a new look for Loki at Disneyland Resort along with new merchandise around the world and food and beverage offerings at Disney Springs! Get the details on the Disney Parks Blog.

They also shared the same video on TikTok:

New Loki fit check at #CaliforniaAdventure ! IFYKYK, if you don’t you should stream Loki on #DisneyPlus

New Loki fit check at CaliforniaAdventure! IFYKYK, if you don’t you should stream Loki on #DisneyPlus ? @disney #Disney #Disneyland #Loki

From this, we can see that the characters in Avengers Campus may be continuously updated to reflect their current status within the Marvel Cinematic Universe.

As we discussed, of course, Loki will meet Guests in Avengers Campus:

If you’re visiting Disney California Adventure park this week, you’ll definitely want to check out Avengers Campus, where heroic encounters await you, and now is the perfect “time” for an encounter with Loki himself! Over the next month, we may even see different sides of Loki as you’ve never seen him before, sometimes accompanied by the Minutemen of the Time Variance Authority (TVA).

shopDisney will also have a plethora of Loki merchandise available for Guests to peruse and purchase, and Disney Springs will be celebrating the God of Mischief as well:

Located near Disney Springs? You’re in luck! Indulge in a Loki Mini Dome Cake at Amorette’s Patisserie. This sweet treat has a Dulce Mousse, Apple gelee, salted caramel crisp pearls and lemon chiffon! Then head on over to The Ganachery for the Fractured Timeline Ganache Pop, an Apple ganache pop decorated with clashing green colors, gold dust, and a fractured timeline on top!

Do you plan on watching Loki now that it is available on Disney+?

Want to experience Avengers Campus? Our friends at Academy Travel can help and EarMarked Diamond!