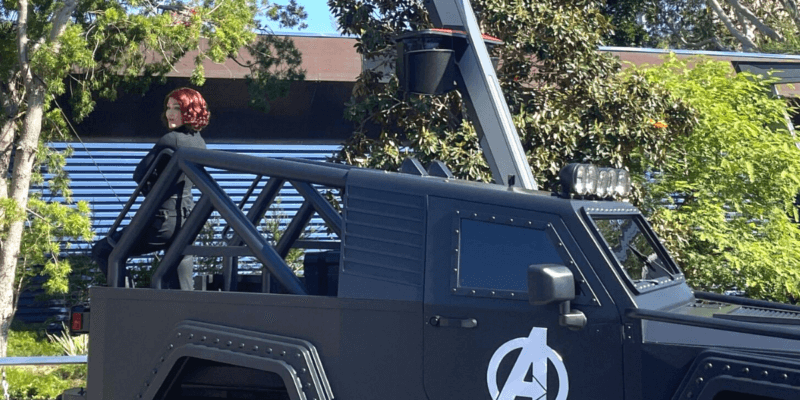 One of the best things about Avengers Campus is how interactive the land is between super heroes and fans. The attractions make you feel like you’ve stepped into your own Marvel movie, where Spider-Man swings from the tops of buildings and Thor strolls by asking which way the Bifrost is. But one of the coolest things is the stunt show featuring Black Widow.

Fans will get to see the villainous Taskmaster, a new character in the upcoming Black Widow movie, who is making his first appearance ever at Disney Parks. Taskmaster’s abilities include photographic reflexes, which means we can initiate any super hero move and fighting style — making him an equal in every fight, no matter how skilled an Avenger is.

The character will show up and be on the lookout to steal some valuable things from Avengers Headquarters, so it’s up to Black Widow to save the day. Sometimes, she’ll get help from her Avengers friends like Black Panther and Captain America, who are all ready to spring into action and save the world. Just another normal day at the parks!

“This is going to be the largest assembly of these heroes anyplace, anytime, anywhere. Avengers Campus is a place for them to live, work, play, protect and train. Our Guests will have many different ways to interact with our heroes, through heroic encounters and also through epic action sequences in atmospheric shows,” said Dan Fields, Executive Creative Director for Disney Parks Live Entertainment.

That couldn’t be more true. In the video below, around 4 minutes in, you can see Black Widow hanging off the wall just like Spider-Man before Black Panther swings up next to her. The two then fight Taskmaster, who has shown up to try to steal the secrets of Avengers Campus — and maybe some of Black Widow’s own. From what our team saw on opening day of the new land, it’s a pretty intensive stunt show that’s exciting and captivating.

Catch a clip of the stunt show in the video below:

You can also see the full stunt show on our Instagram here:

Avengers Campus opened on June 4 and Black Widow will release simultaneously in theaters and on Disney+ with Premier Access for a one-time additional fee on July 9.

Are you looking forward to seeing Black Widow’s stunt show at Avengers Campus? Sound off below!

Comments Off on Watch Black Widow Take on Taskmaster at Avengers Campus!