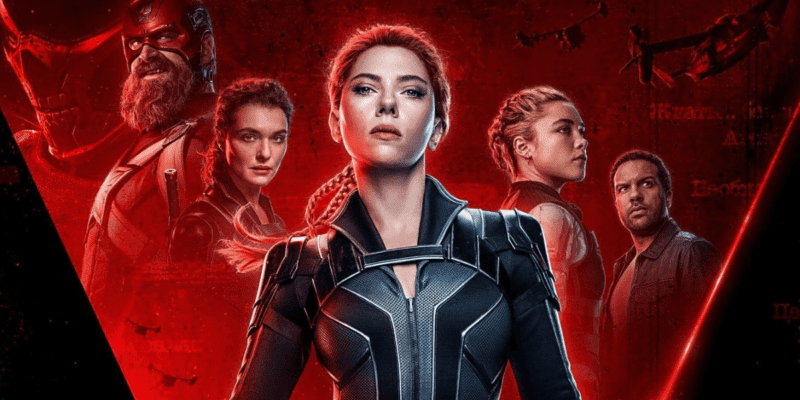 Black Widow is coming to theaters and Disney+ on July 9, 2021. It has been delayed for over a year because of the COVID-19 pandemic, but Marvel fans are ready to return to the MCU in a big way this summer.

Whether or not you are planning to see Black Widow in the theaters or in the comfort of your own home with the Premier Access cost of $29.99, you are in for a thrilling adventure following Natasha Romanoff AKA Black Widow (Scarlett Johansson) in her first solo outing directed by Shortland.

You will also meet a cast of characters from Natasha’s past including Alexei Shostakov/ Red Guardian (David Harbour), Yelena Belova (Florence Pugh), Melina Vostokoff (Rachel Weisz), and O-T Fagbenle’s mysterious character who may or may not be the villain Taskmaster.

Black Widow is a prequel to the events of Avengers: Infinity War (2018) and Avengers: Endgame (2019). It takes place after Captain America: Civil War (2016) while the Russian spy is on the run from the Sokovia Accords. It is taking the Avenger back to her Russian root and while dealing with her trauma and experience with the Red Room Program.

So, you might want to know more about the Red Room before you sit down with your popcorn and watch Natasha finally take center stage.

Origins of the Red Room Academy

During the Cold War, the Russian organization known as Department X created a secret facility located in Moscow. This Red Room Academy kidnapped or recruited young girls to be brainwashed into becoming sleeper agents or deadly assassins known as Black Widows. The most famous graduate of this program is Natasha Romanoff but there have been many others.

What is the Black Widow Program?

The Black Widow Program began with 28 orphan girls. It was run by Professor Grigor Ivanovich Pchelintsov who had developed a method of imprinting false memories onto his subjects. This allowed the Black Widows to become undetectable while under deep cover.

The Back Widow Program was created after the success of the Red Room’s Winter Soldier Program. In Marvel Comics, Natasha and Bucky Barnes AKA the Winter Soldier (Sebastian Stan) have a long romantic history that began in the Red Room.

As the Black Widow, Natasha also suffered under the hands of Dr. Kudrin, who experimented on all of the subjects to give them superhero-like immune systems that kept them healthy and young for many decades.

In the MCU, during Avengers: Age of Ultron (2015) Natasha revealed that as part of the Black Widow Program she was left unable to have children. Other versions of the graduation ceremony involved having young girls fight to the death against their friends.

Related: The Fight For the Ultimate Marvel Character Dominates TikTok

What is the role of the Red Room Academy in the Black Widow Program?

It is possible that Alexei Shostakov’s Red Guardian will be retconned into another program developed under the Red Room Academy. In Marvel Comics, Alexei is not traditionally a graduate of the Red Room like Natasha, whom he married in the comics.

But as Black Widow will focus on the Red Room, his MCU origin will most likely be tied to it. The Winter Guard – Russia’s equivalent to the Avengers — is rumored to appear in the Marvel movie and could become yet another Red Room program.

Where was the Red Room Academy first established and by whom?

At one point the Red Room was destroyed but reformed in America under the leadership of Alexander Cady, who cloned Natasha. In one Black Widow trailer, it is suggested that Taskmaster in control after a successful Red Room takeover in the MCU.

What Happens in the Red Room?

We do not much about the exact procedures in the Red Room. In Age of Ultron, Natasha has a flashback where she is dancing ballet. This is a reference to her origin in the comics Natalia Romanova, a ballerina who joined the KGB after her husband’s death. This origin has been completely retconned since.

In Agent Carter, Marvel Studios revealed that the Black Widow students would be chained to the bed each night to prevent them from escaping during their training. They also established that the Red Room used films of popular movies like the Disney classic Snow White and the Seven Dwarves (1937) to teach the girls to speak English. The film is edited to include the subliminal messages of “Instill,” “Fear,” and “Pain.”

What is the Red Room designed for?

The overarching goal of the secret government project was to turn the origin 28 orphans into femme fetal assassins who could infiltrate any organization as sleeper agents and wait to be activated. After graduation, many Black Widows would go on to work for Leviathan, the Russian version of Hydra.

How does the Red Room Academy train participants?

Madame B was Natasha’s teacher while she was in the Red Room. The students are put through all sorts of training on a daily basis which included hand-to-hand combat, weapons, tactics, and acrobatics. In Age of Ultron, Natasha remembers telling Madame B “You’ll break them.” To which her teacher responds “Only the breakable ones. You are made of marble.”

How does the Red Room Academy brainwash participants?

The brainwashing part of the program was led by Vasily Karpov and Grigor Pchelintsov, “psychotechnologist”. There was a “programmer” named Professor Radchenko who helped implant the Red Room’s students with false memories, designed to turn the girls into sleeper agents. They might not even know that they were assassins and spies.

This was later involved in cloning their best operatives like Natasha, who had defected to join the Avengers. These clones were blank slates that were more easily programmed with the brainwashing without having to overwrite any existing memories.

Notable residents of the Red Room

In Marvel Comics, if a character has ties to Russia it normally stands to reason that they have some connection to the Red Room. In the MCU, fans know that Natasha is a graduate and that she was trained by Madame B.

Some characters from Russia may or may not have volunteered for the program but others like the Winter Soldier were abducted and brainwashed. The Red Room even got their hands on She-Hulk at one point.

Related: Check Out These Marvel Films That Never Got Made

Who is Yelena Belova?

It is most likely that characters introduced in Black Widow like Yelena Belova, Melina Vostokoff, and Alexei Shostakov also came from the Red Room. And the Winter Guard, which David Harbour leaked, is from another Red Room Program as well.

Yelena’s history with the Red is very similar to Natasha’s. In Marvel Comics, Yelena believes that she is the rightful Black Widow and often goes up against Natasha. Natasha in turn thinks of Yelena as more like an annoying younger sister, calling her “little one.”

Who is Dottie Underwood?

The Disney-owned ABC series Agent Carter introduced another Black Widow named Dottie Underwood (Bridget Regan). Agent Carter may or may not be canon now that Captain America/Steve Rogers (Chris Evans) went back to live out his life with Peggy Carter (Hailey Atwell) at the end of Avengers: Endgame.

However, Dottie Underwood expanded a lot on how the Red Room worked in the Marvel Universe that is worth catching up on before the Black Widow release. It is through her story that Marvel reveals how the young girls in the Red Room are forced to kill each other as we Dottie kill her friend Anya.

Dottie joined Leviathan and worked with Johann Fennhoff to infiltrate the Strategic Science Reserve (SSR) which was the early form of SHIELD.

Related: “Bucky Barnes Is Free” Says ‘The Falcon and the Winter Soldier’ Writer

Appearances of the Red Room in the Marvel Cinematic Universe

As of now, Marvel fans have not seen the modern version of the Red Room in the MCU. Marvel Studios has only revealed so much of the program. Its presence is felt in the Black Widow trailer as the Avenger goes back home to deal with something involving the Red Room.

So far, every detail about the Red Room in the Marvel Cinematic Universe comes in flashbacks like the moment that shakes Natasha to her core in Avengers: Age of Ultron.

How does the Red Room fit into the plot of Avengers: Age of Ultron?

As part of the attack, Wanda mind controls Natasha and she had a flashback of her time in the Red Room. There are flashes of her dancing and using weapons. There are snippets of conversations between Natasha and Madame B. The memories leave Natasha, along with the rest of the Avengers who fell under the Scarlet Witch’s spell, unnerved.

She later opens up to Bruce Banner (Mark Ruffalo) about her experience and the two have bonded. There is even subtext in the film where Natasha is a mother-like figure for the Hulk, so she tells Bruce:

“In the Red Room, where I was trained, where I was raised, um, they have a graduation ceremony. They sterilize you. It’s efficient. One less thing to worry about. The one thing that might matter more than a mission. It makes everything easier. Even killing.”

How does the Red Room fit into the plot of Agent Carter?

Related: Is There a Wild Connection Between Bucky Barnes and ‘WandaVision’?

There version of the Red Room from Agent Carter is set in the 1930s before Natasha is even born. Through Dottie Underwood’s flashbacks, more about the brainwashing process is revealed. Marvel shows Underwood and her class learning English by watching Disney movies.

Agent Carter also meets a young girl who has not graduated from the Red Room yet named Eva. While Carter and the Howling Commandos take pity on the young girl, she has already been trained to be a killer. Though a small child, Eva killed two Howling Commandos – Junior Juniper and Mike Li before escaping.

Related: Marvel Actor Criticized For Being “Too Ugly” to Play Shang-Chi

What upcoming Marvel movies is the Red Room expected to appear in?

Marvel Studios will expand the Red Room backstory in the upcoming Black Widow movie. Natasha and the other graduates will take on Taskmaster. Taskmaster may be another Red Room alumna but according to one trailer he controls the Red Room.

Everything about the first appearance of Taskmaster in the MCU has been kept top secret by Kevin Feige and Marvel Studios. It is not known who is playing the villain or what their goal is. It is unlikely he will be another one-and-done Marvel villain as he can currently be seen running around Avengers Campus.

So now you know everything about the Red Room in the Marvel Cinematic Universe, how it relates to Natasha Romanoff and other characters who will be introduced in Marvel’s Phase 4. Hopefully, you are prepared to catch any Easter eggs in Black Widow.

Let us know in the comments below if you are ready to learn more about Marvel’s Red Room in Black Widow.