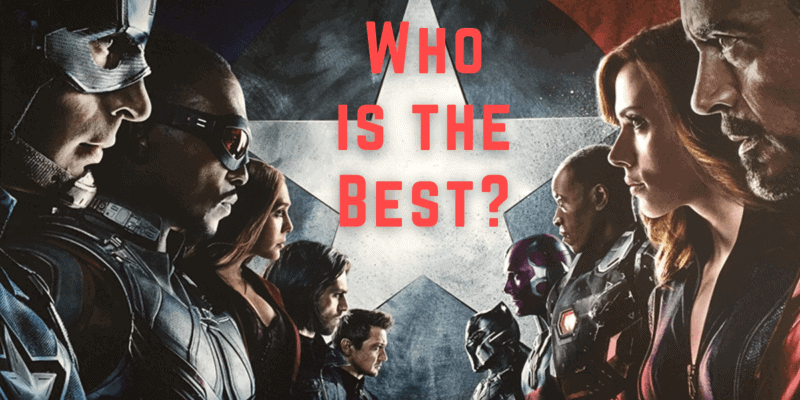 For over a month now, a phenomenon created by Zachary Carpe has slowly taken over the Marvel community on TikTok. It started as a fun idea to pick the best Marvel character in the Marvel Cinematic Universe. The battle royale began with 140 characters – and now it has finally concluded, and the winner has been announced.

Leave your predictions in the comments! #mcu#marvel#bracket#marvelbracket#marveltok#marvelstudios#tfatws#marvelfan#avengers#avengersassemble#TikTokGGT

There were some battles that were complete knockouts, especially in the early days of the Marvel Studios character bracket. In the first set of battles. Loki (Tom Hiddleston) who is getting his own Disney+ series utterly destroyed The Other – Thanos’s (Josh Brolin) servant at the end of Avengers (2012) and who also appeared in Guardians of the Galaxy (2014) as played by Buffy and Angel star Alexis Denisof.

The score was 99.5% to .5% shocking absolutely no one. Honestly, the biggest surprise was that there were enough people voting just to be contrary that The Other even registered at all.

But, let’s be honest, you only want to know who won in the end. The final four came down to Tony Stark/Iron Man (Robert Downing Jr.) vs Natasha Romanoff/Black Widow and Peter Parker/Spider-Man (Tom Holland) vs Wanda Maximoff/Scarlet Witch (Elizabeth Olsen).  Formidable matchups indeed.

Then the 140 characters became two. It was the ultimate showdown of ultimate destiny.

The man who started the whole franchise versus the strongest avenger. There is something poetic about the final bout being between Tony Stark and Wanda Maximoff. Tony Stark started the whole Marvel Cinematic Universe and all his attempts to try to right his wrongs only seemed to make things worse.

And, is there any other Avenger he has wronged more than Wanda? Let us not forget that it was his bomb that killed her parents and first had Wanda using her magical hex powers – as was revealed in WandaVision. Stark Industry weapons fueled the Sokovian Civil War, which radicalized Wanda and her brother Pietro Maximoff/Quicksilver (Aaron Taylor-Johnson). That is why they volunteered to let Hydra experiment on them.

But in the end, there can only be one fan-favorite Marvel character:

The one, the only, Tony Stark. Iron Man himself. Could there be any other choice? Iron Man set the stage for every Marvel character that came to the MCU after him. If fans did not love him, the whole shared universe would have failed. Fans are still grieving his death in Avengers: Endgame (2019).

When you look at the Marvel universe, Peter Parker summed it up best in Spider-Man: Far From Home (2019) when he said “Everywhere I go, I see his face.” Tony Stark is the foundation that the Marvel Cinematic Universe is built on.

There were nearly 150 battles throughout the TikTok event. Many were easy decisions, like choosing Gamora (Zoe Saldana) from Guardians of the Galaxy over Alexander Pierce (Robert Redford) from Captain America: The Winter Soldier (2014), with a score of 98.4% to 1.6%.

And the Supreme Intelligence/ Mar-Vell / Dr. Wendy Lawson (Annette Bening) did not stand a chance against Natasha Romanoff, it ended with a score of 99.4% to .6% shocking absolutely no one.

Other battles came down to the wire with Nakia (Lupita Nyong’o) from Black Panther (2018) barely beating Cassie Lang (Abby Ryder Fortson/ Emma Fuhrmann/ Kathryn Newton) from Ant-Man (2015) with a final tally of 50.3% to 49.7%. Cassie Lang is slowly growing in popularity as Marvel Studios sets her up to become a Young Avenger.

Another close fight was FBI Jimmy Woo (Randall Park) from WandaVision and Ant-Man and the Wasp (2018) vs Heimdall (Idris Elba) from Thor (2011) – 54.5% to 45.5%. That one was a tough call to be sure. Woo was later defeated by another magician – Doctor Strange (Benedict Cumberbatch).

There was some controversy about including Stan Lee as the sum of all his cameos when he beat Maria Rambeau (Lashana Lynch) from Captain Marvel (2019). Carpe, the creator of the bracket, took a vote after the results and Stan Lee was able to keep his victory of 92.2% to 7.8%.

There were some contentious battles like T’Challa/Black Panther (Chadwick Boseman) vs Shuri (Letitia Wright) with the Black Panther narrowly beating his little sister 57.5% to 42.5%. One of the most heated matchups had Loki beating his brother Thor (Chris Hemsworth) 51.1% to 48.9%.

Related: Check Out These Marvel Films That Never Got Made

Then Peter Parker/Spider-Man (Tom Holland) from Spider-Man: Homecoming (2017) knocked out the leader of the Avengers, Steve Rogers/Captain America (Chris Evans) 52% to 48%. Ironically, it was Captain America: Civil War (2016) that first introduced the web-slinger to the Marvel Cinematic Universe.

One match-up that broke my heart, even though I voted for the victor – our new Captain America Sam Wilson (Anthony Mackie) who just came off his own Disney+ original series The Falcon and the Winter Soldier. He beat out Agent Phil Coulson (Clark Gregg) 85.5% to 14.5%. Agent Coulson was representing the heart of the old Marvel Television universe since he led the Agents of SHIELD series on ABC for seven seasons from 2013-2020.

There was not a lot in the way of major upsets. One score that shocked me was Ant-Man/Scott Lang (Paul Rudd) defeating Captain Marvel/Carol Danvers (Brie Larson) 79.7% to 20.3%. Not that I did not think Ant-Man would win, just not quite by that margin.

For those who are sad that the battle is over, Zachary Carpe’s work is only just beginning. He announced on TikTok before the end of the fight that he is thinking of doing another bracket, but this time for Star Wars characters. We’ll see how that goes.

You can find the full bracket of fights on Carpe’s TikTok page, so please let us know if there are any fights that you think the fans got wrong.