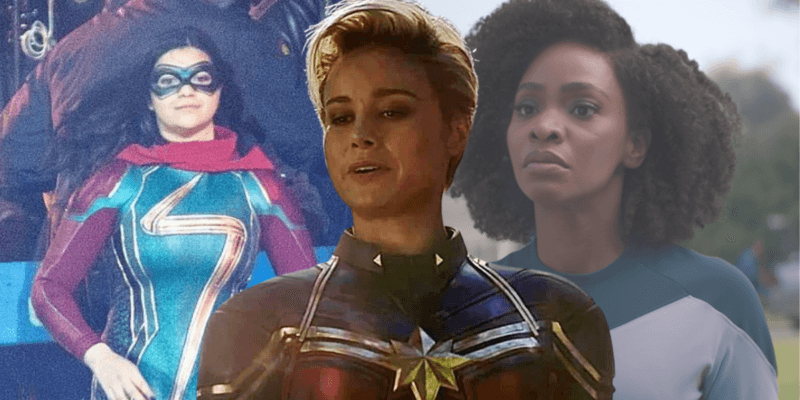 Brie Larson certainly has stayed busy since filming Avengers: Endgame (2019) and Captain Marvel (2019) back to back. And after over a year away from Carol Danvers it is finally time for her to return to as The Marvels begins principal photography today.

Iman Vellani will join Brie Larson’s Captain Marvel in her second solo outing as the Avenger. Vellani’s character Kamala Khan takes on the superhero name of Ms. Marvel after being inspired by Carol Danvers’ heroics, and she gains her Inhuman shape-shifting abilities.

They will also be joined by WandaVision star Teyonah Parris as Monica Rambeau. It’s not known yet which of Monica’s comic book names she will be using in The Marvels — most likely Spectrum or Photon. Marvel fans first met Monica in Captain Marvel as the daughter of Carol’s best friend.

Teyonah Parris recently posted to her Instagram that she was in London, England where The Marvels is currently filming. It’s not clear what part of or how much the sequel is being filmed at this location.

Monica Rambeau returned to the Marvel Cinematic Universe to help Wanda Maximoff/ Scarlet Witch (Elizabeth Olsen) through her grief. Monica Rambeau ended the experience getting her superpowers when she crossed through Wanda’s Hex one too many times.

In Marvel Comics, Monica was Captain Marvel back when Carol Danvers was still Ms. Marvel. Some fans have asked that she take over as Captain Marvel by the end of the Marvel movie, as Brie Larson has faced some backlash – though much of the criticism against her is steeped in toxic masculinity.

The Captain Marvel sequel will be written by WandaVision‘s Megan McDonnell and directed by Nia DaCosta and is currently scheduled for release in theaters on November 11, 2022. As of right now, this is the closest Marvel fans may be getting to the female superhero team, A-Force, in the MCU, at least for a while — though Marvel has a whole list of secret projects that they have not announced.

Nothing on the plot has been confirmed yet, but Jude Law will return as Yon-Rogg alongside as yet uncast brother. The speculation is that while Yon-Rogg will start out the film as a villain, he may join forces with Captain Marvel against a new main villain played by Zawe Ashton (Netflix’s Velvet Buzzsaw).

Though who Ashton is playing remains unconfirmed. Theories include Karla Sogen AKA Moonstone or the Shi’ar queen, Cal’syee Neramani, AKA Deathbird. The villain most likely will be someone of an Avenger-level threat like Thanos (Josh Brolin) who Captain Marvel nearly defeated in Avengers: Endgame (2019).

Oscar Winner Brie Larson took to Twitter to show fans how she stayed prepared to fly Higher, Further, Faster as one of the strongest avengers. The Captain Marvel actress displayed her ability to do an epic one-armed pull up which has fans pumped for her next Marvel movie.

Captain Marvel fans are excited to see the character move beyond her role as a space cop dealing with the galactic war between the Kree and Skrull and take on new and exciting challenges in Marvel’s Phase 4.

Though due to the busy schedule involved in the production of The Marvels, Brie Larson has decided to take a break from her YouTube channel.

Let us know in the comments below what you want to see most in The Marvels.