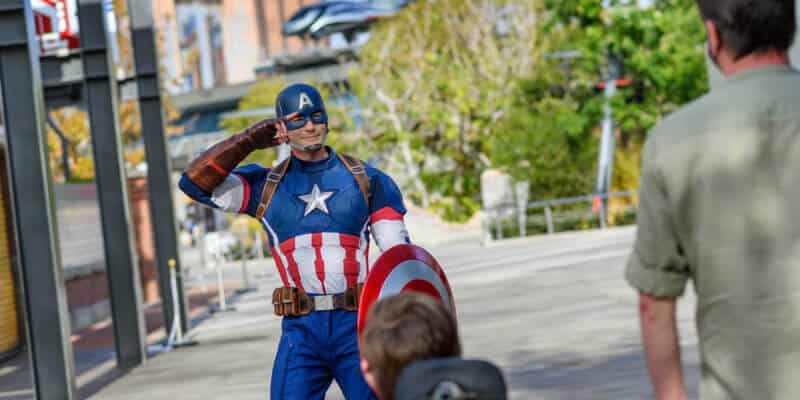 Avengers Campus is officially open, and now Marvel fans will have a chance to become immersed in the Marvel Cinematic Universe. The opening ceremony on June 2 was a sight to behold. But as Guests enter the new land at Disney California Adventure Park at Disneyland Resort, they may be a little confused as to when in the MCU timeline Avengers Campus is set.

Related: Heading to Avengers Campus? What You NEED to Know

Guests know that Star Wars: Galaxy’s Edge is set at a very specific point in the Star Wars timeline. That’s why Guests interact with characters from the sequel trilogy like Rey Skywalker and Kylo Ren but are not about to bump into Obi-Wan Kenobi, Darth Vader, or Luke Skywalker.

This is not the case over at Avengers Campus. This new land is not set in a specific moment in the Marvel timeline. Disney has described the experience as having all of Earth’s Mightiest Heroes from across space and time in one place.

Avengers Campus may look new, but its lore dates far back in the Marvel timeline. Originally, it was the location of a sanctum for the Vishanti, a trio of mystical sorcerers. It was then discovered by Howard Stark, the father of Tony Stark. Howard built a Stark Motors facility on the land.

After Tony Stark inherited the facility he turned it into the WEB headquarters and invited young scientific minds like Peter Parker and Lunella Lafayette to come and invent new technologies for superheroes.

Now that it is open to the public, Guests can join in on the fun at the C.A.M.P.U.S. — which stands for Centralized Assembly Mobilized to Prepare, Unite, and Safeguard. Marvel does love their acronyms. There they can explore everything this new land has to offer. However, some may notice some inconsistencies in the continuity of the Marvel Universe.

Guests waiting for WEB SLINGERS: A Spider-Man Adventure can see Spider-Man in a unique suit specific to Disney Parks (though it is quite similar to his Spider-Man: Homecoming (2017) suit). This is not the Spider-Man suit Peter Parker has been wearing since Avengers: Infinity War (2018).

This Spider-Man exists alongside the Iron Man Gauntlet from Avengers: Endgame (2019). There is even a brand new Iron Man armor – Mark 80 — that never appeared in the Marvel Cinematic Universe. It is unique to the Disney Parks. Guests can also meet characters who are no longer alive in the MCU like Natasha Romanoff/Black Widow and T’Challa/Black Panther.

Depending on when a Guest goes to Avengers Campus, they can see either the Steve Rogers version or the Sam Wilson version of Captain America that was introduced in The Falcon and the Winter Soldier. Guests may also see the villain from the upcoming Black Widow movie, Taskmaster, trolling the park even though that movie is a prequel set after Captain America: Civil War (2016).

You can even find Miles Morales’s name written on a wall near the Spider-Man attraction, hinting at the Spiderverse.

How Can Avengers Campus Exist at Different Times?

This all points to one thing – that Avengers Campus could exist in the Nexus of All Realities. This is a place straight from Marvel Comics where characters and now Disneyland Guests can travel between different realities or timelines in the Marvel Universe.

The Marvel Cinematic Universe’s Phase 4 is all about opening the MCU to the multiverse and fans will be able to see this for the first time in the upcoming Loki series on Disney+. WandaVision already dropped one reference to the Nexus. It seems like everything is ready to go to expand the Marvel Universe and Avengers Campus is the next step.

Brent Strong, executive creative director, Walt Disney Imagineering had this to say about how Avengers Campus fits in the Marvel timeline:

“We’ve assembled heroes from across all of space and time for that mission. And it is, we’re all about to discover in a couple of weeks when ‘Loki’ comes out, time is a lot more squishy than any of us think. And so trying to put a specific date to it, it can be challenging, but to us, Avengers Campus is here and now, right, we get to live in the moment and these heroes are here with us and you’re taking part in that story.”

Neither Marvel Studios boss Kevin Feige nor anyone at the Walt Disney Company has mentioned the Nexus in the press leading up to the opening of Avengers Campus. It would be fun for Guests to imagine themselves as Nexus Beings like the Scarlett Witch and Loki, able to travel across the Marvel multiverse and pick up on all those hidden Easter eggs.

Placing Avenger Campus inside the Nexus of All Realities can explain different versions of the same characters making their way through the land. Or how Guardians of the Galaxy – Mission: BREAKOUT! is walking distance from a facility designed by Howard Stark. And why the Thor walking the park still has his original hammer that was destroyed in Thor: Ragnarok (2018).

Let us know how you think this theory lines up with your experience in the park.

Comments Off on Avengers Campus Welcomes Guests Into the Marvel Multiverse