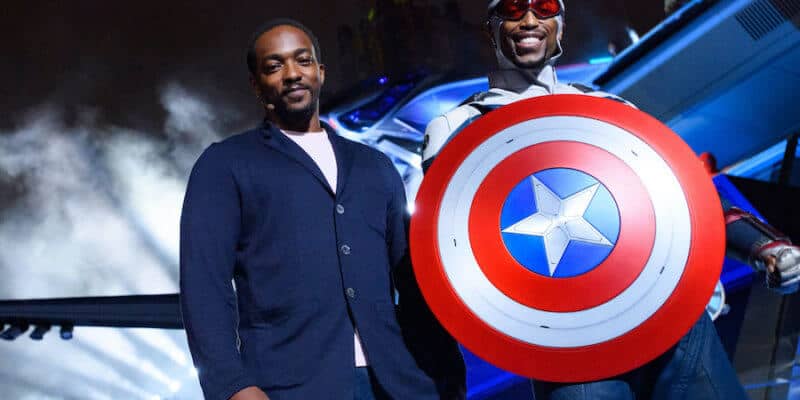 New hero recruits will encounter the Avengers in new and thrilling ways when they visit the newest addition to Disney California Adventure Park, Avengers Campus. And now, it has officially been revealed that the new Captain America, Sam Wilson, will be a part of the Campus.

Anthony Mackie — who originated the role of Sam Wilson in the Marvel Cinematic Universe and who most recently portrayed the hero in the Disney+ series The Falcon and the Winter Soldier alongside Sebastian Stan as Bucky Barnes — was at the Avengers Campus Opening Ceremony on Wednesday night to share the big news.

“It’s really wonderful to be here. I mean, what a ride it’s been. I’ve loved being a part of these movies and now, with Disney+, this series,” Mackie said.

“It was an emotional moment for me in the beginning of these films, and when Sam Wilson finally became Captain America, it was a moment that was all about the future, a moment where kids of all races can look at Captain America and maybe see a little bit of themselves,” Mackie continued. “I’m so proud to be a part of the Cinematic Universe and now part of all this.”

“So with that, it is my honor to introduce, for the first time in Avengers Campus, Captain America.”

Following the introduction by Mackie, the newest Captain America, Sam Wilson, came onto the stage wearing the all-new suit revealed at the end of The Falcon and the Winter Soldier when Wilson took up the mantle. Mackie then presented the hero with the Captain America shield.

Now, as we know, Sam Wilson’s Captain America is one of the many heroes that Guests can encounter at Avengers Campus. But what does that mean for the prior Captain America, Steve Rogers, who has been spotted in the land and featured in promotional images? In the just-released image below, you can see Steve Rogers’s Captain America (a role that originated in the Marvel Cinematic Universe by Chris Evans) on the right.

Well, let us explain. Unlike Star Wars: Galaxy’s Edge at Disneyland Park and Disney’s Hollywood Studios, Avengers Campus at Disney California Adventure doesn’t exist in a fixed timeline. Heroes at Avengers Campus will show up as they please, and you never know exactly who you will encounter in any given hour, day, or even week.

As Marvel Studios President Kevin Feige shared, just like Disneyland, Avengers Campus will never be completed — it will continue to change and grow. Feige confirmed that as more heroes are introduced to the Marvel Cinematic Universe, more heroes will show up in Avengers Campus. So, we will get to see the heroes we know and love from past films as well as new ones we are being introduced to in new series and movies on Disney+ and in theaters.

On your next visit to Avengers Campus, you could see Steve Rogers. You could see Sam Wilson. Or you could see someone else completely. Truly, it all depends on which Avengers decide to stop by the Campus…when they aren’t busy saving the world. After all, they are Earth’s Mightiest Heroes for a reason.

What a night! I had so much fun at the opening ceremony of Avengers Campus. Thanks to all of the Cast Members and Imagineers – as well as our friends at the Studios for being part of tonight’s event. Can’t wait for all of you to see it!

Are you excited to encounter Sam Wilson, the new Captain America, at Avengers Campus? Click here to book a trip!