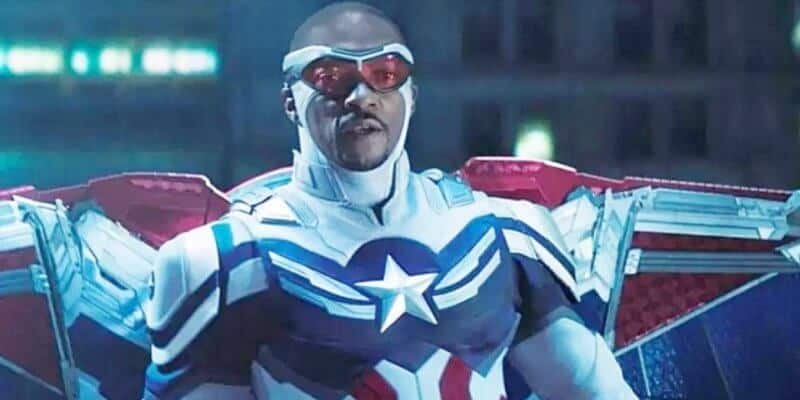 Now that the world has seen The Falcon and the Winter Soldier, Marvel has peeled back the curtain on putting the series together in a new documentary called Marvel Studios Assembled.

Filled with interviews and behind-the-scenes footage, the series—which started with WandaVision and will continue for all upcoming Disney+ films, including Black Widow—is a fun way for fans to look back at the action of their favorite series.

In an interview, which involves Anthony Mackie (Sam Wilson) and Sebastian Stan (Bucky Barnes) sharing insight about their characters and journeys in the MCU, Anthony Mackie reflects on his journey towards officially becoming Captain America and what that means for the world we currently live in, saying:

“For Marvel to give me the opportunity as a black man, from the south, to become Captain America, I think, says a lot, not only about the work that I’ve put in to get to this point that they would entrust me with that. But with the way that they’re hoping to change the way society looks at itself.”

In Phase 4, the MCU is changing in dozens of different ways. Old heroes have retired or passed on, new heroes have taken up their predecessor’s mantle, and the world is living in a post-blip world where superheroes aren’t the secret people they used to be. Mackie emphasized this change by acknowledging that means people are going to have to get used to seeing heroes in a different way—the way America is built.

“Being a soldier and being a veteran, being a counselor, he realizes that as a people, we’re all Americans. I’m not Black Captain America. Steve wasn’t white Captain America. He was solely Captain America. So as a society, as a country, we need to realize, that all the people who are citizens here on this soil, no matter what their origins are, they are Americans. And, you know, the old adage, ‘I am my brother’s keeper,’ comes into play. You know, Sam realizes he deserves the right, he’s earned the right of Captain America and that has nothing to do with his race or his background.”

Despite this, Mackie realizes how important it is to take up the shield and what that could mean for so many people around the world, particularly young children. It’s always been Marvel’s mantra to reflect “the world outside your window” and having diverse heroes on the big and small screen is showing just how committed Marvel is to listening to the world around them and putting new stories into the world. Mackie said,

“With everything that’s been going on with COVID and the murders of Breona and the murder of George Floyd, and the riots, and the activism going on with the young generation now, and, you know, the Black Lives Matter movement; it’s been jarring to me and surprising how timely this series is. My truth has changed and evolved so much. As far as me being a father, as far as me being a man, and as far as me being an American. And a lot of that has come out of this role and this series. So, it’s been humbling in a real sense. But also inspiring to think that my sons will be able to turn on the TV and see a Black Captain America.”

Now that The Falcon and the Winter Soldier’s first season has ended what is next for Anthony Mackie? There is a possibility of a second season for the series on Disney+, and we are sure Marvel will eave the character into other shows and movies!

You can see the full lineup of Marvel Phase 4 content here.

Are you looking forward to seeing more of Anthony Mackie as Captain America in the MCU?