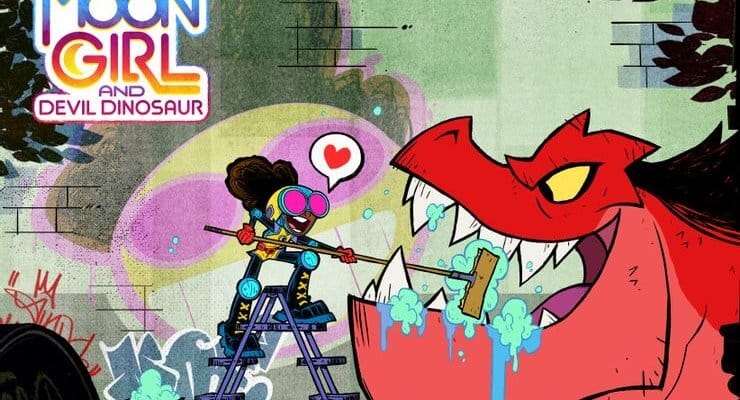 Disney+ is branching its new line of Marvel content into the animated world in 2022. Based on the critically acclaimed comic book series from 2015, the new cartoon, Moon Girl and Devil Dinosaur, will be geared towards a younger audience. Disney has just announced the voice cast for the new animated series.

The official description from Marvel reads:

“Based on Marvel’s hit comic books, “Marvel’s Moon Girl and Devil Dinosaur” follows the adventures of 13-year-old super-genius Lunella Lafayette and her 10-ton T-Rex, Devil Dinosaur. After Lunella accidentally brings Devil Dinosaur into present-day New York City via a time vortex, the duo works together to protect the city’s Lower East Side from danger.”

Related: Mike Hobson, Pillar of What Marvel Comics Is Today, Passes Away

Lunella is a gifted inventor with a strong imagination and personality to match. She may be the smartest person in the Marvel Universe despite being a little girl. In the comics, she is an Inhuman (a race of humans who underwent genetic manipulation at the hands of the Kree resulting in super-powered individuals). Lunella wanted to find a way to prevent ever getting her powers, fearing the radical transformations Inhumans experience.

However, after being exposed to a Terrigen cloud, Lunella discovers she can swap bodies with the Devil Dinosaur.

Fred Tatasciore (Marvel’s Avengers Assemble) gets the honor of voicing Devil Dinosaur and series executive producer Laurence Fishburne will voice the recurring role of The Beyonder. The Beyonder is a cosmic entity that exists outside the regular dimension of the universe. In the comic books, he is one of the most powerful characters ever created, with the ability to take on someone like Fantastic Four villain, Galactus.

Tell us what you are most excited about for Moon Girl and Devil Dinosaur?