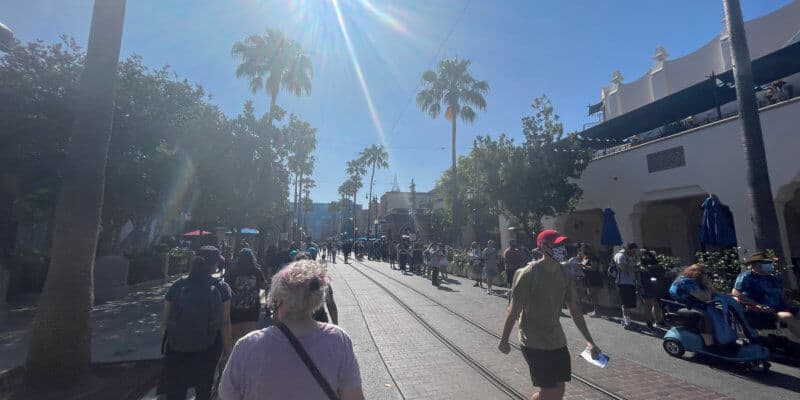 The long-awaited Avengers Campus at Disney California Adventure Park at the Disneyland Resort finally opened on June 4, with the line to enter the land stretching all the way through the park.

For years, fans of the Southern California Disney theme parks have eagerly waited to welcome Iron Man, Spider-Man, and Doctor Strange to Disneyland’s Avengers Campus. With the official opening delayed due to the pandemic, Marvel fans held in their excitement.

Now, the day is here, and Guests can finally visit the new Marvel-themed land, including the groundbreaking Spider-Man attraction, WEB SLINGERS: A Spider-Man Adventure.

However, the line to get into Disney’s Avengers Campus stretches all the way through the entire park.

Related: Guests Wait OVER an Hour For Starbucks at Disney California Adventure

Our very own Krysten Swensen at Inside the Magic captured a snippet of the queue to enter Marvel’s Avengers Campus. You can watch the video below:

As you can see, the massive line for Avengers Campus began in the Grizzly Peak area near Soarin’ Around the World, took a left onto Buena Vista Street, and then went down to the Hyperion Theater in Hollywood Land, makes its way back up Sunset Boulevard towards Carthay Circle, and then takes another left toward Avengers Campus. But from there, the line stretches throughout the whole theme park with multiple switchbacks near Pixar Pier, Goofy’s Sky School, and other fan-favorite attractions.

At this time, just an hour after the park officially opened, Guests have to wait in a line that takes them through multiple theme park lands before entering Avengers Campus, which is being held at a limited capacity.

The only entrance in Avengers Campus being utilized is the eastside entrance near Carthay Circle Restaurant across from the Grizzly Peak waterfall.

Due to the six-foot physical distancing protocols practiced in the Disneyland Resort, the queue for Avengers Campus may seem a bit longer than it actually is. However, with this being the opening day for the new land, with capacity limited, and with Guests allowed to stay in the land as long as they want, there is no doubt that it will take quite a long time for Guests to enter — unless you managed to get a Boarding Group for WEB SLINGERS.

As a result of the increased distance between each party in line, the standby queue to enter Avengers Campus has made its way over to the viewing area for World of Color near Pixar Pier. Past that and it stretches towards the Goofy’s Sky School attraction and then switches back!

As the Avengers Campus queue is taking up a majority of the wide walkways in California Adventure, the new land’s standby line really does stretch throughout the entire park.

Inside the Magic’s very own Bailee Abell captured the exit of Avengers Campus, currently outside of Guardians of the Galaxy – Mission: BREAKOUT! As this attraction is now a part of the land, you must be in Avengers Campus to ride the popular Guardians attraction.

As crowds shift throughout the day, the line for Avengers Campus will either shrink or grow. In the picture above, the new entrance for the queue begins in the Hollywood Land area towards the Monsters, Inc. Mike & Sulley to the Rescue! attraction.

Taking place in an alternate Marvel Cinematic Universe, the Avengers Campus opening takes place in a timeline without Thanos’s snap. As a result, you can see Iron Man in his Mark 80 suit throughout the Marvel land! From the new attraction to multiple opportunities to meet your favorite Marvel super hero, Avenger fans are sure to make this new land home.

Help protect the Sanctum Sanctorum with Doctor Strange, pick up the coolest Spider-Man merch at Web Suppliers, and enjoy the amazing details and Easter Eggs placed by Imagineers!

Guests visiting the Disneyland Resort are ready to experience one of the California theme park’s most immersive adventures to date, and the lines will keep on growing. Stay tuned with all of the latest updates on Avengers Campus on Inside the Magic!

Are you visiting Avengers Campus? Let us know in the comments below!