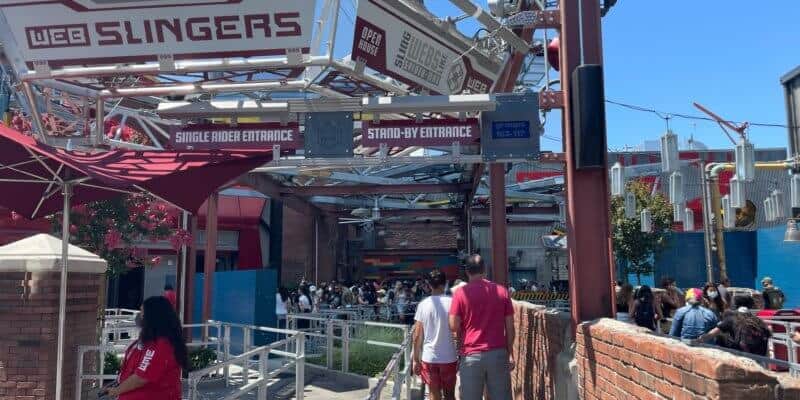 WEB SLINGERS: A Spider-Man Adventure is the newest attraction at Disneyland Resort, and its popularity over the last couple of months has been overwhelming until now.

WEB SLINGERS: A Spider-Man Adventure is located in Avengers Campus at Disney California Adventure. Much like Star Wars: Rise of the Resistance in Star Wars: Galaxy’s Edge at Disneyland Park, the attraction has a virtual queue in which Disney California Adventure Park Guests can join at set times throughout the day (7:00 a.m. PST AND 12:00 p.m. PST). Typically, Boarding Groups fill up very fast; however, this week, we have seen a steep decline in Guests trying to obtain a Boarding Pass.

Today, we have seen that for the 12:00 p.m. PST drop, there were still Boarding Groups available for Guests to join well over an hour later, which is typically unheard of!

We first checked 14 minutes past the second Boarding Group release, which was surprising in itself.

Then, after 30 minutes, Boarding Groups continued to remain available.

Around an hour and 15 minutes past noon PST, we still saw availability.

And finally, an hour and 30 minutes later, we still could join the line for the coveted attraction!

Finally, almost two hours later, we saw the Boarding Groups fill up for the attraction.

We have seen this outcome for WEB SLINGERS Boarding Groups become a trend within the past week, shocking since so many Guests typically flock to Avengers Campus when they enter the Park. It seems that since Disneyland Resort announced that Disneyland would be selling their Magic Key Passes at the end of August, many locals (which is what Disneyland’s main audience is) have potentially paused their visits to hold out for after August 25, when they can buy an Annual Pass that will let them in more than just once!

Wait times all over Disneyland Resort have been quite low today, and seeing the result of leftover Boarding Passes on WEB SLINGERS is just confirmation that Disneyland Resort (particular Disney California Adventure) is having a low crowd day!

Are you shocked to see Boarding Groups still available for WEB SLINGERS: A Spider-Man Adventure?