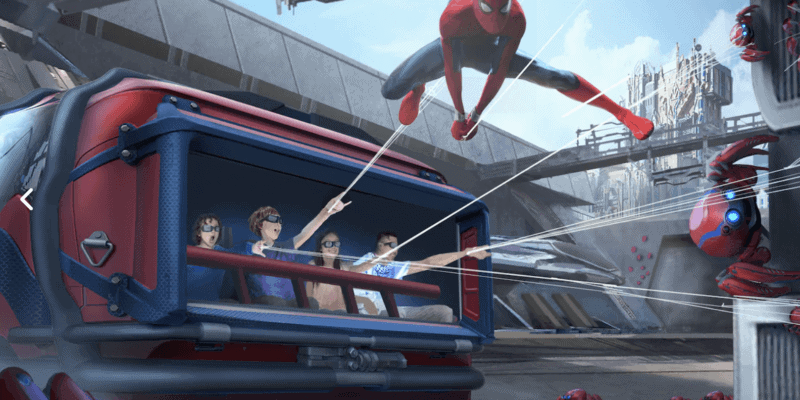 Since it opened art Avengers Campus at Disney California Adventure Park on June 4, WEB SLINGERS: A Spider-Man Adventure has taken its place as one of the most in-demand attractions at the Disneyland Resort. The ride operates on a solely virtual queue — which means that Guests visiting Disneyland must sign in to the Disneyland app and try to secure their spot to ride the attraction. The WEB SLINGERS virtual queue opens at 7 a.m. and again at noon, and is typically completely full in less than one minute.

Unfortunately, Guests visiting Disney California Adventure on August 7 may not have the same luck as Guests before them. At approximately 12:45 p.m. PST, the Disneyland mobile app reported that WEB SLINGERS was “Temporarily Closed”. As of 2:10 p.m. PST, the ride was still closed. Prior WEB SLINGERS attraction closures have only lasted a few minutes.

Disney has not stated why the ride is closed, but it could have been a larger mechanical problem and Cast Members have to reboot the entire attraction.

Here is some more information about the popular, new Avengers Campus ride from the Disneyland website:

WEB SLINGERS opened up on June 4, when Avengers Campus officially opened to the public after years of anticipation and delays due to the pandemic.

Have you ridden WEB SLINGERS since it opened at Avengers Campus? Let us know in the comments!