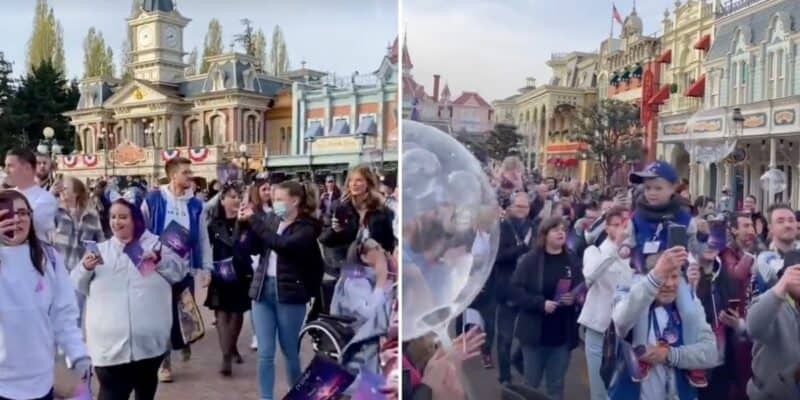 Formerly Euro Disneyland Park, France’s Disney Resort, will celebrate its 30th birthday, today, April 12, 2022. Home to Sleeping Beauty Castle and Guest-favorite offerings like the Disney Illuminations fireworks, Disneyland Park has now been open since 1992. It has been a bumpy road for Disneyland Paris, but the party on Main Street, U.S.A., today shows those worries are a thing of the past.

Along with Walt Disney Studios Park — the location of the future Avengers Campus — and Disney Village, Disneyland Park began its 30th anniversary celebrations over a month ago on March 6. Like Walt Disney World Resort’s 50th anniversary began some of its offerings ahead of October 1, 2021, Disneyland Paris debuted many of its new shows, costumes, food, and merchandise early.

And while crowds have been high across much of the Disney Park portfolio worldwide, including Disneyland Paris, it is no match for today’s official 30th celebration. Although last night’s gathering for Disney Illuminations was huge!

Cast Members and executives lined the beloved walkways of Main Street U.S.A, welcoming Guests with balloons, songs, and cheers, in a truly remarkable moment for Disney Parks and The Walt Disney Company, especially after dealing with such unprecedented times amid the pandemic.

President of Disneyland Paris, Natacha Rafalski, was also among those leading the festivities. The Disney executive shared videos on Instagram of huge crowds and parades of Guests trailing toward Sleeping Beauty Castle and the rest of the Disney Park attractions. Disneyland Paris News also shared an image of Cast Members waving to Guests with exclusive event flags:

Guests are celebrating the 30th Anniversary of the opening of Disneyland Paris. On this occasion, they are welcomed by Cast Members who have gathered to form a receiving line on Main Street, U.S.A., at the entrance of Disneyland Park #DisneylandParis30

Guests are celebrating the 30th Anniversary of the opening of Disneyland Paris. On this occasion, they are welcomed by Cast Members who have gathered to form a receiving line on Main Street, U.S.A., at the entrance of Disneyland Park #DisneylandParis30 ➡️https://t.co/y48pJXt3oa pic.twitter.com/g4lz3MlSi1

Disneyland Park has welcomed numerous new additions over the past month to usher in this fourth decade of theme park operations. Debuting around Sleeping Beauty Castle, both the Disney D-light drone pre-show to Illuminations and the Dream… and Shine Brighter! character performance has been delighting Guests throughout March.

Then, if Guests want to opt for something different, the Gardens of Wonder, featuring many Disney character sculptures like Princess and the Frog‘s (2009) Tiana, is a stunning attraction bringing Disney magic to the Park in a completely different way.

Like the United States Disney Parks (Walt Disney World, Disneyland Resort), Disneyland Paris also has a paid “FastPass” option in the form of Disney Premier Access. Along with the aforementioned rides, options like Indiana Jones and the Temple of Peril, and France’s Haunted Mansion attraction, Phantom Manor, can be experienced quicker using the service which is purchased in addition to a Disneyland Paris ticket.

Those lucky enough to stay on Park property at a Disney hotel like Disney’s Hotel New York — The Art of Marvel will get to experience even more of the magic. At this time, the popular Disneyland Hotel is currently under renovation.

Are you visiting Disneyland Paris during its 30th anniversary? Let us know in the comments down below!