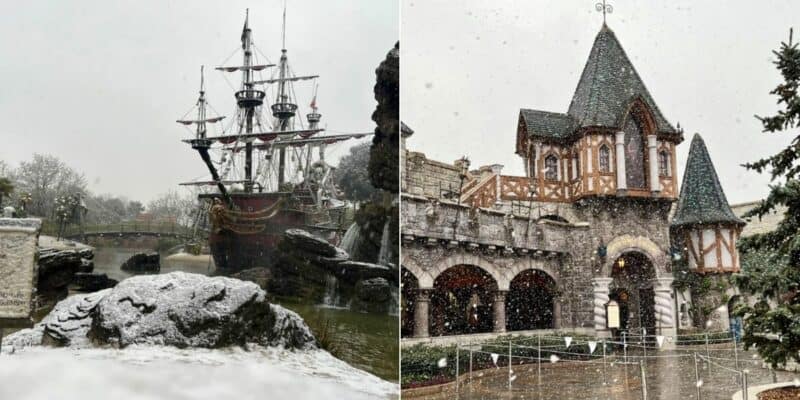 Guests waking up at one Disney Resort were in for a surprise this morning as cold weather and snow descended on the theme parks.

Stretching all over Disneyland Park at Disneyland Paris, snowfall covered each of Disney’s magical lands and attractions, casting a wintery spell for Guests on their vacation. See photos and videos of the weather taking over Main Street, U.S.A. and more below!

In addition to the exciting developments at the French theme parks, the Resort is currently celebrating its 30th anniversary celebrations, bringing Guests new shows like the Disney Illuminations pre-show Disney D-light and Dream… and Shine Brighter! which occur around Sleeping Beauty Castle in Disneyland Park.

And to make that celebration even more magical, the weather has taken a turn, with snow raining down on the Parks. Sharing to Twitter, DLP Report (@DLPReport) showed, through photos and videos, just how the snow came down over Disneyland Paris.

The snow sticks on the ground, pretty incredible for April!

❄️ The snow sticks on the ground, pretty incredible for April! pic.twitter.com/5BVSbUlVt3

Snow in the jungle? Only at Disneyland Paris!

❄️ Snow in the jungle? Only at Disneyland Paris! 🌴 pic.twitter.com/ab9MhkGqvd

Disneyland Paris will be celebrating its 30th anniversary for many months to come, meaning Guests visiting or staying in one of the Disney hotels will be able to experience the event or visit other locations like Disney Village.

The Disney hotel portfolio at Disneyland Paris is one of the biggest after Walt Disney World, and most recently, the Parks opened Disney’s Hotel New York — The Art of Marvel, which joins other accommodations like Disney’s Hotel Cheyenne, Disney’s Hotel Santa Fe, and Disney’s Newport Bay Club. The Resort’s premier hotel destination, Disneyland Hotel, is currently under renovation and will reopen with theming including Tangled (2010) and Frozen (2013).

Have you ever visited a Disney Park in the snow? Let us know in the comments down below!