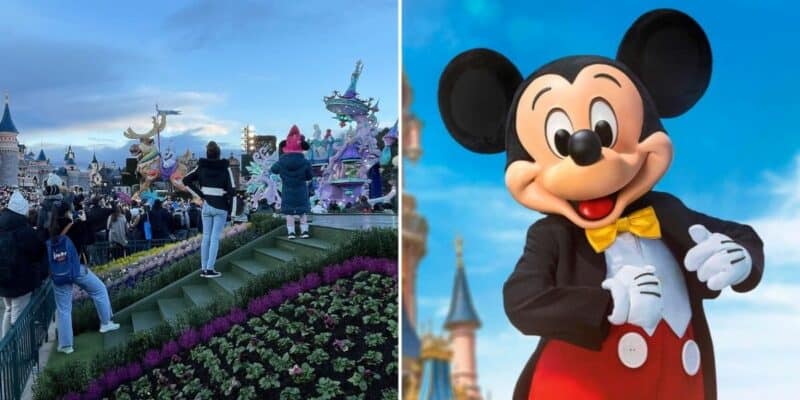 Joy should certainly be in the air at Disneyland Paris, as the Disney Park steams towards the beginning of its 30th anniversary. Unfortunately, handfuls of Guests are causing disruption over at Disneyland Park by entering a prohibited area for a photo op.

Disneyland Paris is nearing its 30th anniversary. After opening in 1992 as Euro Disney, the French theme park destination has gone on quite a journey. Now, with Walt Disney Studios Park and Disney Village joining Disneyland Park, and with new, exciting upcoming attractions like Avengers Campus and Arendelle: World of Frozen coming in the near future, this Disney Park is primed for an exciting birthday celebration.

However, while the last remaining plans for the festivities get underway. Some Guests are utilizing a prohibited area surrounding the Sleeping Beauty Castle attraction for photo opportunities, and better sightlines when it comes to entertainment like Disney Stars on Parade.

DLP Report (@DLPReport) caught an image of Guests trespassing on the stage stairway.

Guests are trespassing on the new stages stairs during Disney Stars on Parade causing safety issues. Sadly Guest Floe Cast Members tell us they simply don’t have enough people to monitor them all.

Guests are trespassing on the new stages stairs during Disney Stars on Parade causing safety issues.
Sadly Guest Flow Cast Members tell us they simply don’t have enough people to monitor them all. pic.twitter.com/qReLLxz8XX

It should be noted that not all areas at Disney Resorts worldwide are clearly marked if they are prohibited locations, but if in doubt a Cast Member should be asked before utilizing anywhere questionable like the stairway here at Disneyland Paris.

This is not the first time that Guests have trespassed at a Disney Park. Last year, one Guest climbed to a forbidden balcony on Cinderella Castle at the Walt Disney World Resort, while just a few weeks ago, Guests at EPCOT dropped to a prohibited platform around the World Showcase.

As for Disneyland Paris, it has also not been the first mention of understaffing at the theme parks. Housekeeping staff at Disney Hotel, Disney’s Newport Bay Club, walked out due to poor working conditions and alleged understaffing, prompting children to “sleep on the floor”.

These issues were again emphasized when CGT union members protested in front of Sleeping Beauty Castle and later caused a portion of the central hub to close down, upturning Disneyland Park’s entertainment schedule.

It seems there is an ongoing issue at Disneyland Paris when it comes to understaffing within their amusement parks.

Disneyland Park, Walt Disney Studios Park, and Disney Village will come together from March 6, 2022, to mark the momentous occasion. Disneyland Park will see an all-new drone show debut as well as a Castle stage performance featuring over 30 characters.

Ahead of new entertainment debuting, Disney Illuminations will return on 16 February following yet another closure caused by the French government’s guidelines in relation to the pandemic.

Do you think that Guests should pay more attention to the rules? Let us know in the comments down below!

For all information on the current health and safety protocols including face-coverings, Health Passes, and vaccination requirements, then head here for the official information.