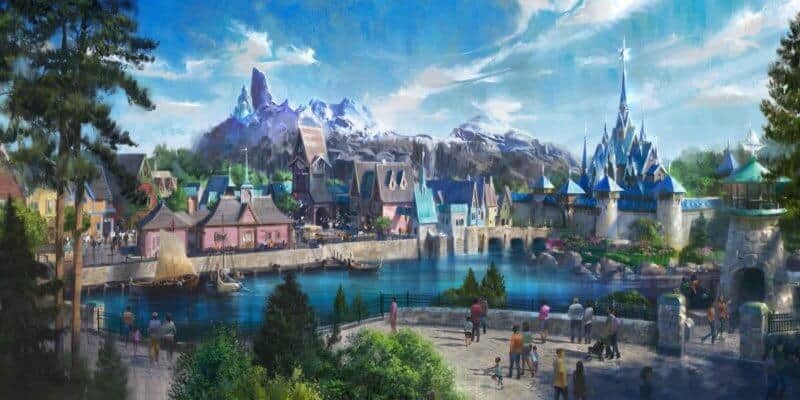 We certainly want to travel Into the Unknown at the upcoming Frozen themed land, coming soon to Disneyland Paris!

And now, we are even more excited because we just got a first look at the Frozen themed castle as well as the layout of the land within the theme park.

Thanks to Twitter user, OutsidEars insiders, we now have this sneak peek at what the layout will look like for the upcoming Frozen themed land expansion.

Related: Disney’s New Beauty and the Beast Castle is Gorgeous Inside and Out!

The layout shows both the facade and the landscape for the Frozen themed theme park land, which is currently under development at Disneyland Paris.

The blueprints in the Tweet show off the Arendelle mountains, which look like they will be built along the backside of the land. The mountains will frame the beautiful castle as well as the village of Arendelle.

Though the upcoming expansion land doesn’t yet have an official name, it is being referred to as “Frozen Land”. It is expected to include a replica of the extremely popular Walt Disney World Resort attraction, Frozen Ever After, which replaced Maelstrom in the Norway Pavilion in Epcot, back in 2016.

OutsidEars also states that the new “Frozen Land” expansion will be home to not one, but two shops, and a restaurant! It will also include a meet & greet area with characters from Disney’s Frozen such as Anna and Elsa.

And if you look at the concept art from Disney below, you’ll see that the lake will be the center of the new land. The lake is about 7.5 acres in size and will more than likely be an entertainment stage with a 360 degree viewing area! (How cool is that?)

It has also been reported that the lake will be created with “advanced lighting, sound, special effects technology, and fountains to offer guests brilliant water-based shows”.

You can also see the village of Arendelle laid out beautifully alongside the ice palace that Queen Elsa builds with her ice powers. You can read more about the upcoming Frozen themed land here.

We aren’t sure if there will be any other attractions (like possibly a roller coaster) or any other meet and greets (maybe one with Olaf like in Disney’s Hollywood Studios? Or maybe we will even get one with the beloved Kristoff?) But regardless, it’s safe to say we cannot wait for this new theme park expansion to open at Disneyland Paris!

We know Walt Disney Imagineering is working extra hard to make this upcoming Frozen land perfect and we can’t wait to see the outcome. The new Frozen themed land is currently set to open in Disneyland Paris in 2023.

Do you plan on visiting the Frozen themed land in Disneyland Paris once it opens? Let us know in the comments.