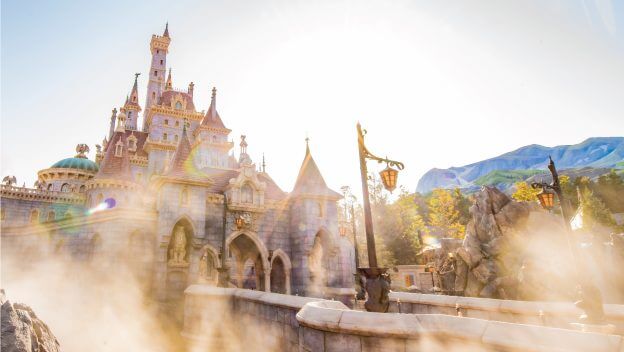 In September 2020, after a five-month delay due to the pandemic-related closures of Disney Parks around the world, Tokyo Disney Resort finally opened the gates to its New Fantasyland expansion of Tokyo Disneyland.

Tokyo Disneyland opened April 15, 1983, becoming the first Disney Park to open outside the United States. Since then, it has delighted Guests of all ages with its enchanting atmosphere. And now, you, too, can feel as though you’re living in your very own fairy tale in New Fantasyland, the latest expansion of the Tokyo Disneyland theme park.

The new land will include lots of unique Disney touches. Some may think we’re most excited about the Happy Ride with Baymax attraction inspired by Big Hero 6 and The Enchanted Tale of Beauty and the Beast attraction, but after you see this stunning castle, you’ll believe us when we share that there is nothing more enchanting than the latest castle at the Disney Parks, Beast Castle.

Disney Imagineers constructed the new area to be reminiscent of Belle’s village from Walt Disney Studios 1991 Beauty and the Beast. The new area includes La Taverne de Gaston restaurant, as well as shops and even Maurice’s cottage. And like inside the New Fantasyland expansion at Walt Disney World, the land boasts Gaston’s fountain. You can view more on the official Tokyo Disney Resort website here.

“The newest area of Fantasyland will immerse guests in the world of Walt Disney Animation Studios’ “Beauty and the Beast.” Belle’s village will make guests feel like they’ve dropped into the beginning of the classic film and are getting ready to follow Belle on her adventure. The centerpiece of the area, Beauty and the Beast Castle, will hover above the land and house the new attraction, Enchanted Tale of Beauty and the Beast.” – Disney Parks Blog

You’ve seen Cinderella Castle at Magic Kingdom in Walt Disney World and Sleeping Beauty Castle at Disneyland in California, but the Beauty and the Beast Castle at New Fantasyland at Tokyo Disney Resort is just as beautiful (if not more so!).

Disney Parks Blog described the new additions to Tokyo Disneyland ahead of the opening of the Beauty and the Beast expansion of New Fantasyland:

Inside of the Beast’s castle, guests will find Enchanted Tale of Beauty and the Beast, a unique attraction created just for Tokyo Disneyland where guests can dance to the music from one of the most beloved Walt Disney Animated Studios’ films — “Beauty and the Beast.” This attraction brings the story to life in a way that’s never been seen before. Guests will board enchanted serving dishes and follow Belle on a romantic musical adventure, where she dances her way into the heart of the Beast just in time to break the fateful spell.

Disney fans of the Tokyo Disney Resort were awaiting the unveiling of the New Fantasyland expansion for a couple of years before it opened, and they were overjoyed to finally have the opportunity to experience it when the land opened to the public in September 2020. We think the beautiful new castle looks very much like the one in the animated film, and we can’t wait to visit Belle’s village and step into her world. Take a look at the following video — it will make you feel as though you are actually there!

Want to know even more about the enchanting fairy tale of New Fantasyland? We have a treat for you. Shortly after New Fantasyland and Belle’s village opened last year in 2020, Disney released a behind-the-scenes look at the new attraction, Enchanted Tale of Beauty and the Beast. Read more here!

Are you planning to visit Tokyo Disneyland to see the New Fantasyland attractions? Which Disney castle is your favorite? Let us know in the comments.

If you would like to book a trip to any Disney theme park, including Tokyo Disneyland, contact our friends at Academy Travel. Their expert team will help you navigate Disney reservations and make sure your experience is smooth! Contact Academy Travel today for a free theme park quote to take the most magical vacation of a lifetime.