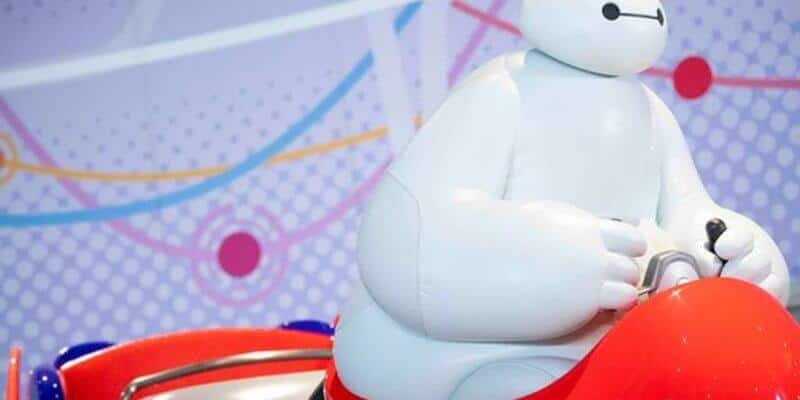 Not to sound like a spoiled 5-year-old, but this isn’t fair!

On April 15, Baymax will make his first appearance on a ride at a Disney theme park–in the form of an exciting new attraction inspired by Big Hero 6.

The Happy Ride with Baymax is the first-ever attraction at a Disney Park to be inspired by the 2014 animated film that features Baymax–“the healthcare companion”–and a group of young and ingenious friends who work together to defeat an enemy who’s been right under their noses all the time.

The new ride will be one of the featured attractions at Tokyo Disneyland’s big expansion. The ride vehicles look super cool and feature Baymax’s trademark colors–purple and red. It will be based on the same ride system as the Alien Swirling Saucers attraction at Disney World’s Hollywood Studios (which gives more credence to the point I’m hoping to drive home in this particular post).

It’s about time. Baymax has been in our lives for years now, but he remains one of the most underappreciated and under-merchandised Disney characters to this day. Having a ride inspired by him is quite the fitting antidote for our conglomerate overlooking of such a sweet character. I hope he’ll forgive us.

But Disney World needs a Baymax ride too! It’s a little unfair that Tokyo Disneyland is getting such a huge expansion with completely new rides. It’s not so much the expansion that isn’t fair as it is the newness of rides like The Happy Ride that is unfair. Ok, maybe it’s not so unfair. But Magic Kingdom could use a few touch-ups and additions too. (P. S. Tokyo Disneyland is 12 years newer than Magic Kingdom.)

And at this time, we’re only awaiting the dawning of the era of the TRON Lightcycle/Run. (Does anyone else feel like the TRON ride has been under construction for a bajillion years?)

It’s not a question of space. There’s certainly enough room amongst Mickey’s stomping grounds–they haven’t even gotten close to filling up all the land that Walt bought so long ago. It would take some doing to fill up 25,000 acres. I know, right? Twenty-five thousand! And because Disney World (more specifically Magic Kingdom) a sort of flagship when it comes to Disney’s theme parks. Disney World is the largest of the Disney Parks and draws in over 50 million visitors each year. Fifty million. Five-zero million. That should count for something.

I know what you’re thinking–Disney World has seen massive expansions over the last 6 years–Magic Kingdom’s Fantasyland expansion in 2014, followed by Pandora at Animal Kingdom in 2017, Toy Story Land at Disney’s Hollywood Studios in 2018, followed by Star Wars: Galaxy’s Edge in 2019. But the new expansion at Magic Kingdom is nearly 6 years old. It’s time for some new things–and not just that crazy blue bicycle-coaster coming to Tomorrowland.

We need NEW rides. Hey, Imagineers, you already have the blueprints for the Baymax ride; no need to re-invent the wheel there. But I am lobbying (not really) for brand-spanking-new rides, so yes, there will be the need for wheel inventing there.

And if they won’t give us Baymax, let’s have some new rides like these. (See, Imagineers don’t have to dream up any new ones for Magic Kingdom. They’ll be needed to do more of the “eering” than the “imagin-ing.”) But they are brilliant at doing exactly that.

So the excuse of it taking years to imagine and design and create new attractions is a moot point. At least right now.

Disney World has been around for almost 50 years. It’s not as old as Disneyland, but Disneyland is fairly land-locked so I can’t really lobby for brand-new attractions there. Fifty years is a big deal! And we need more than the park parties to celebrate! So again, if we can’t have Baymax, let’s commemorate Disney World’s 50th anniversary creatively and uncharacteristically and have a contest. (A contest?) Yes, a contest.

It works like this: any Disney fan of any age would be welcome to participate. (Disclaimer: Admission to parks is not contingent upon a fan’s participating in this contest.) Let’s scope the massive talent among the millions of Disney fans all across the country, and the one with the most creative attraction idea will have his or her idea used in the creation of one or two new atttactions.

You’re thinking of one right now aren’t you? I rest my case.