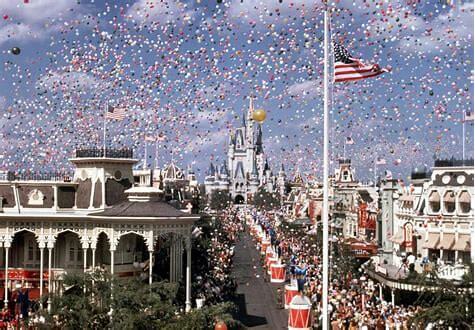 It’s been 48 years since Walt Disney World, the Most Magical (and most wonderful) Place on Earth, opened just southwest of Orlando, Florida, and truly, the world has never been the same! On Walt Disney World’s birthday, let’s take a look back on what made this resort a reality.

Disneyland in California opened on July 17, 1955, and it was more wildly successful than even Walt could have imagined (and he had one of the greatest imaginations of all time). He decided very quickly that he wanted to build another park. But where?

You’d be surprised how crazy cheap it was to buy up swampland in Central Florida. Who would want swampland anyway? After all, you can’t do much with it–or so it was thought pre-1960s.

But all of that would change as multiple “businesses” began buying up Florida swampland in droves. Walt felt that he needed limitless land so that he could always keep adding on to Disney World, without the challenge of being land-locked like he was in Anaheim.

What wasn’t known at the time was that Walt Disney was the driving force behind each business’s purchase. He had to be incognito with the purchases because he knew that if it were discovered that he was the one taking up residence in the swamps of Central Florida, that he would end up paying a fortune for the slimy, waterlogged, gator- and mosquito-infested land.

But someone got wise after several of the transactions went through. That’s why many reports show Walt paying around $80 apiece for the first several acres and then nearly $80,000 apiece for the last acres purchased! As soon as Walt knew he’d been found out, he immediately scheduled a press conference to confirm that he was, indeed, behind the “Florida Project.”

Construction began on Cinderella Castle and all the buildings and fixtures of Magic Kingdom. Main Street, U.S.A., Walt decided, would be designed to look like the main street of a town in the early part of the 20th century. Walt Disney World’s Main Street U.S.A. was inspired by the main street in Walt’s hometown of Marceline, Missouri.

Things were going well. Until a terrible day in 1966 that would change how things were going–at least for a while. Walt got sick, really sick. He was diagnosed with lung cancer at the age of 64 and passed away just 10 days after his 65th birthday.

The Disney empire and the world were shaken.

But Walt’s brother and business partner Roy Disney and Walt’s team of Imagineers pressed on to honor Walt by realizing his dream of the Florida Project.

Cinderella Castle began to take shape, as did the buildings for all 6 lands of Magic Kingdom: Main Street U.S.A., Adventureland, Frontierland, Liberty Square, Fantasyland and Tomorrowland.

Cinderella Castle was one of the finishing touches at Walt Disney World. It was completed in July 1971, just shy of three months before the park would open. The Contemporary Resort was also constructed so that it would be opened the same day the park opened.

Before Opening Day, Roy Disney decided that instead of calling the park “Disney World,” it would be called “Walt Disney World,” so that Walt could be honored and get the credit he deserved.

The amazing Walt Disney World opened on October 1, 1971. The opening was celebrated by Disney fans all over and was the centerpiece of magazine covers for weeks.

More exciting additions and changes are on the horizon as Epcot undergoes a multi-year transformation. New attractions like Mickey and Minnie’s Runaway Railway at Hollywood Studios  are coming

Walt Disney once said that there was enough land at Disney World to “hold all the dreams we could possibly ever imagine,” and we can’t wait to see what dreams come true over the next 48 years at the most wonderful, most magical, most exciting place on earth!