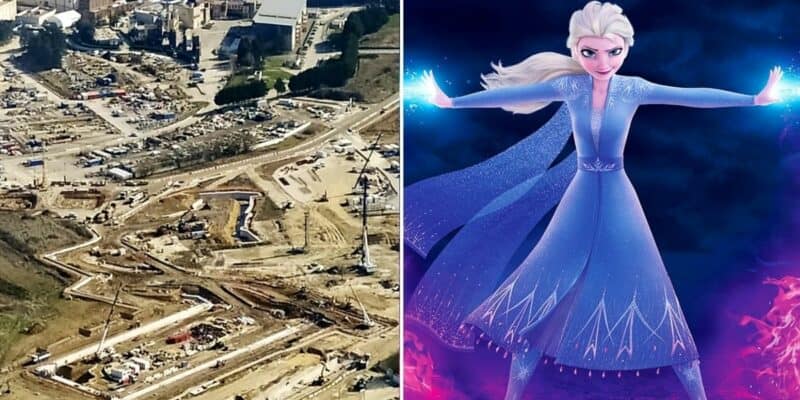 Even while Disney Parks are celebrating big occasions like the 50th anniversary of Walt Disney World Resort or the more recent 30th anniversary celebration happening at Disneyland Paris, the future of the various Parks worldwide is always being created.

Disney World may have new attractions like TRON in Magic Kingdom Park, or Guardians of the Galaxy: Cosmic Rewind in EPCOT, but Disneyland Paris is currently expanding one of its theme park locations exponentially. And aerial shots have just revealed just what is going on at Walt Disney Studios Park.

Disneyland Paris’ 30th anniversary celebrations began on March 6, 2022, and brought new offerings like the Disney D-light drone preshow, the Dream… and Shine Brighter Castle show featuring 33 characters, and the Gardens of Wonder to Disneyland Park. The attention might be on this Magic Kingdom-style Park for now, but the future holds rather remarkable things for its neighbor, Walt Disney Studios Park.

From the Front Lot to Production Courtyard, Toon Studio to Worlds of Pixar, Walt Disney Studios Park houses numerous fan-favorite locations and attractions like The Twilight Zone Tower of Terror and Ratatouille: The Adventure. However, despite its already diverse scope, the Disney Park will be adding more lands in the near future.

Coming up this year will be Avengers Campus, only the second Marvel land after Anaheim’s Disneyland Resort, and will bring WEB SLINGERS: A Spider-Man Adventure to the theme park, as well as an Iron Man re-theme of France’s Rock ‘n’ Rollercoaster Starring Aerosmith.

But, looking further afield is the hotly anticipated Arendelle: World of Frozen and a new Star Wars Land, the latter reportedly in a similar vein to Walt Disney World and Disneyland’s Star Wars: Galaxy’s Edge.

In a stunning new sequence of aerial shots from DLP Report (@DLPReport), fans can now witness the incredible progress being made on the Walt Disney Studios Park expansion, as well as the zones that will become Arendelle from Frozen (2013) and Frozen 2 (2019).

Tonight we’re excited to share a look at the Walt Disney Studios Park expansion project from the sky! Activity is finally picking up on the next phase, with outline of the Frozen show building as well as the future roadways, marinas and huge berms starting to appear: #WDS2

✈️ Tonight we’re excited to share a look at the Walt Disney Studios Park expansion project from the sky!
Activity is finally picking up on the next phase, with outline of the Frozen show building as well as the future roadways, marinas and huge berms starting to appear: #WDS2 pic.twitter.com/WyhpAisxLm

The Frozen-themed land was announced by former Disney CEO Bob Iger back in 2018, and along with French President Emmanuel Macron, surprised Disney fans by revealing the €2 billion investment into Disneyland Paris.

“The resort is already the leading tourist destination in Europe, and the transformative expansion we announced today will add even more of our beloved characters and unparalleled storytelling to create new lands, attractions and entertainment that further elevate the guest experience and drive new opportunities for tourism in this dynamic region.”

Arendelle: World of Frozen will include a huge central lake, reportedly where entertainment will take place in the land as well as an attraction similar to EPCOT’s Frozen Ever After.

From the images above, fans will be able to see the shockingly huge outline of the upcoming attraction show building. As many will know, Disney attractions exist inside massive operating buildings, often with only part of the facade fully themed by Walt Disney Imagineering.

Changes are afoot in Disneyland Paris. One of the biggest shifts at the French theme parks came with the rollout of Disney Premier Access, which, similar to the U.S. Parks’ Disney Genie+, offers Guests a chance to pay an extra fee in addition to their Park ticket for speedier access to rides like Star Tours: The Adventures Continue, and the Haunted Mansion-style attraction, Phantom Manor.

Arendelle: World of Frozen is expected sometime in 2023.

Are you excited for Arendelle: World of Frozen at Disneyland Paris? Let us know in the comments down below!