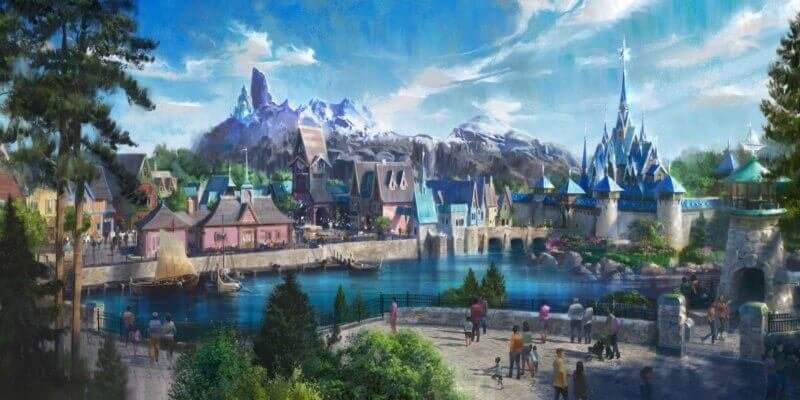 In 2018, Disneyland Paris announced that there would be a $2.4 billion, multi-year expansion coming. Part of that expansion would include a Star Wars land (Star Wars: Galaxy’s Edge), an area for the Marvel Universe (Avengers Campus), and a new fully immersive Frozen land. Disneyland Paris includes Disneyland Park and Walt Disney Studios Park, where this new Frozen land will be. There hasn’t been too much more information revealed, but here’s what we know so far.

What to Expect at Disneyland Paris Frozen Land

Disneyland Paris’s Frozen Land was originally slated to start gradually rolling out in phases starting in 2021 with its full debut in 2023. In 2020, the world as we all knew stopped including the theme park industry which halted construction for this Arendelle replica. Unfortunately, over the last year, Disneyland Paris has been experiencing on and off temporary closures. It is expected to reopen again in 2021, but it is “into the unknown” when it comes to the timeline for the phased debut of Frozen-themed land.

Fret not Frozen fans, because our favorite characters from the beloved franchise will be there to greet us at the European Disney Park before we know it! Before Disneyland Paris closed in 2020, there was a Frozen Celebration, and as the event was not able to run its course, it may come back until parts of Frozen land can be debuted.

The festivities will include a dazzling new show four times a day on the parade route starring Anna, Elsa, Kristoff, Olaf and Sven with incredible dancers and acrobats along with an enchanting new float! Characters from Arendelle will also take part in the Disney Stars on Parade with a “Frozen”-inspired float. During the evenings, the magical adventures of Anna and Elsa will come to life during Disney Illuminations.

To top it off, guests indulge in exclusive treats and drinks and shop a wide range of souvenirs celebrating the adventures of Anna, Elsa and their friends.

Along with being in a new, fully immersive land with new attractions, there are expected to be gift shops where you will find Frozen merchandise to purchase as souvenirs and a restaurant where you can indulge in delicious food once they open up the gates! So, make sure you pack a little extra spending money when you visit the icy mountains of Arendelle.

Inspired by the Frozen films, Arendelle’s fjord will welcome Guests to the home of Princess Anna, now Queen Anna, Queen Elsa, Olaf, Kristoff, Sven, and other Frozen friends. Accompanied by a snow-capped mountain is Elsa’s ice palace and the kingdom of Arendelle. Disney Parks Blog released the concept art for this new area, and with Outsidears, we’re able to see the blueprints for Frozen Land.

From what we know, there is currently set to be one new restaurant coming to Disneyland Paris’s Walt Disney Studios Park along with the gift shops. The new land will be home to a great view of the restaurant as it is surrounded by a magnificent lake as a replica of the port of Arendelle.

Disneyland Paris hasn’t unveiled all the new attractions for this expansion, but we know of at least one ride, a meeting place to say hello to your favorite Frozen characters, and other experiences like possibly a nighttime spectacular is to be expected. In 2019, Disneyland Paris debuted an interactive adventure named Frozen: A Musical Invitation at Animation Celebration.

Walt Disney World currently has an aquatic attraction located in EPCOT’s Norway Pavilion where Guests take a boat journey on Frozen Ever After to Elsa’s ice palace and a meet and greet with Anna and Elsa. Soon Hong Kong Disneyland will also be getting a new attraction in the form of a Frozen-themed roller coaster! It’s called Wandering Oaken’s Sliding Sleighs and it will be very similar to the Seven Dwarfs Mine Train at Magic Kingdom at Walt Disney World.

Soon, you’ll be rubbing shoulders with some “boulders”-a.k.a. Kristoff’s family from Troll Valley-before bracing for the cold.

High up in the icy blue world of the North Mountain, Queen Elsa’s enchanting ice palace awaits. Behold the wonder… and keep an eye out for Anna, Olaf and a few more Frozenfriends.

This enchanting “Summer Snow Day” celebration-complete with many of your favorite Frozen tunes-is sure to melt even the coldest hearts!

Frozen fans young and young at heart have loved this attraction at Walt Disney World which has European Disney fans very excited for the one coming to Disneyland Paris. As you may get wet on this journey, it may be a good idea to visit with our Frozen friends prior to taking this adventure.

As mentioned, exact details of the attraction(s) coming to the real-life Arendelle at Disneyland Paris aren’t yet released. However, as soon as more information becomes available, we will update our website.

When You Can Visit Disneyland Paris Frozen Land

Disney has yet to set an official opening date in 2023, but many Disney fans are excited and looking forward to experience Arendelle Castle sometime two years from now. Tokyo DisneySea will be receiving their new land, Fantasy Springs, which includes a Frozen feature in 2022. Lots of Frozen magic is to come over the next few years, and the biggest one comes from Disneyland Paris. We will continue to update you on Disneyland Paris Frozen land when more information arises.

Are you excited for the new Disneyland Paris Frozen land? Will you be planning a visit when it debuts? Let us know what you’re most curious about in this new land in the comments below!