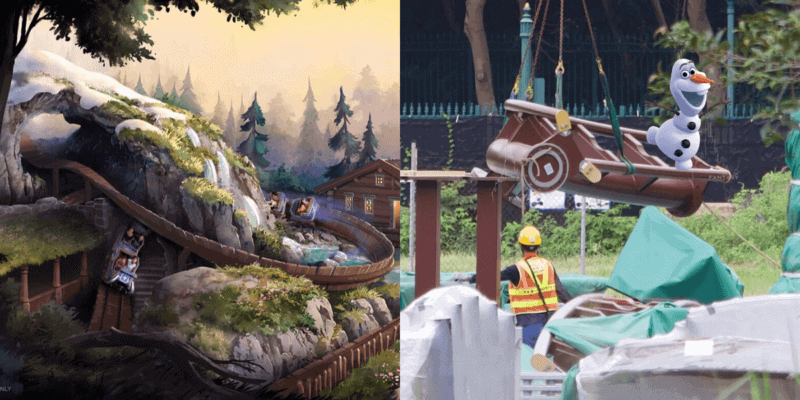 As Disney fans around the world wait for Hong Kong Disneyland to begin reopening, reports are surfacing that construction on the theme park’s new Frozen-themed land continues.

The pictures come from Twitter user, @hkdl_of_fantasy who shared pictures and wrote, “The coaster tracks of “Wandering Oaken’s Sliding Sleighs” at Arendelle: World of Frozen were spotted at the Resort.”

First announced at Disney’s D23 Expo in the summer of 2019, Wandering Oaken’s Sliding Sleighs is going to be a roller coaster attraction and major piece of the land officially called Arendelle: World of Frozen.

Assumed to be very similar to the Seven Dwarfs Mine Train attraction at the Magic Kingdom by some fans after seeing the concept art, this original roller coaster will be joined by a recreation of the Frozen Ever After attraction in EPCOT, and they will play key roles in bringing Anna and Elsa’s kingdom to life.

The construction pictures uploaded to twitter show the track for that roller coaster beginning to be put in place.

Construction on Arendelle: World of Frozen is just one of several construction projects that have been taking place at Hong Kong Disneyland. The resort recently completed construction on a new Marvel-themed attraction called Ant-Man and the Wasp: Nano Battle! and it is in the process of building a brand new castle.

We can see the progress being made on that project as well.

Before Walt Disney World made the announcement to begin a phased reopening of its theme parks, it appeared that Hong Kong Disneyland might have been the first to reopen after Shanghai Disney Resort. Reports showed it was in the process of testing measures for entering the parks to even character dining. Inside the Magic even reported that Disney’s first resort in China was testing a soft reopening for its Cast Members in May. However, at this point, it still remains closed to the public.

Are you excited for Hong Kong Disneyland’s new Frozen-themed land? Let us know in the comments!