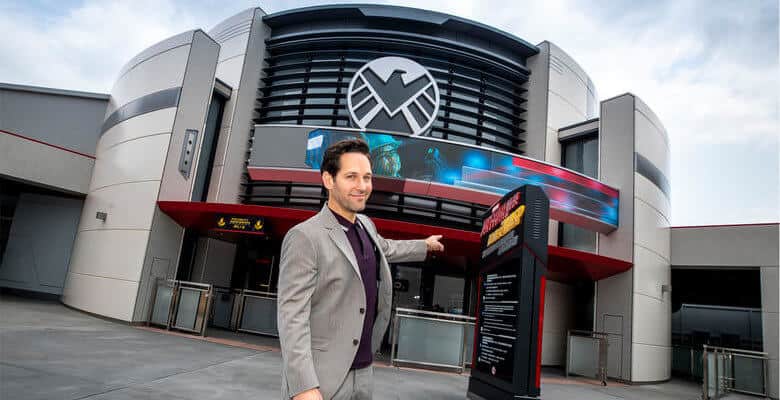 The new Ant-Man and The Wasp: Nano Battle! attraction opened at Hong Kong Disneyland over the weekend and Ant-Man himself, Paul Rudd, was there to kick things off a few days before the general public arrived.

Rudd got a sneak peek of the new interactive adventure, which “continues Hong Kong Disneyland’s Marvel story that began with Iron Man Experience. Tony Stark AKA Iron Man set up a pavilion at Hong Kong Disneyland for visitors to learn about the new tech Stark Industries is developing to keep the world safe,” says Marvel. “However, Hydra has launched a two-pronged attack targeting both Stark Tower in Kowloon and the S.H.I.E.L.D. Science and Technology Pavilion. While Iron Man is fighting Hydra at Stark Tower, he calls upon Ant-Man and The Wasp to help protect the Pavilion against thousands of Swarmbots under the command of Arnim Zola, bent on stealing the Pavilion’s Data Core.”

“I grew up going to Disney Parks, and now to be part of an attraction at Hong Kong Disneyland is a dream come true,” said Rudd. “I can’t wait to share this experience with my kids – they’re going to love it!”

When you visit Ant-Man and The Wasp: Nano Battle!, be sure to look for hidden Marvel details in your surroundings. According to Marvel.com, “The Secure Storage Vault for Alien & Weapon Technology inside the S.H.I.E.L.D. pavilion showcases 14 types of artifacts and research items from Marvel films, TV shows, and comics, some of which are unique and exclusively exhibited at Hong Kong Disneyland.”