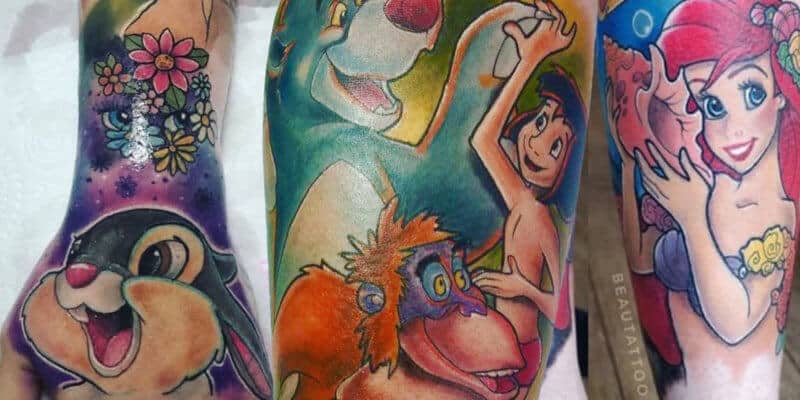 This Disney-obsessed mom spent thousands of dollars to outfit her body with Disney tattoos to pay homage to a company that has brought her magic throughout her entire life, and the results are pretty enchanting.

PA Media reports that Jodie Dunlop, a life-long Disney fan, has a whimsical array of Disney characters tattooed over the majority of her body–a great portion of which include characters from most Disney fan’s favorite original films. Some of her tattoos depict Baloo, Mowgli, and King Louie from Disney’s The Jungle Book and Belle, the Beast, Mrs. Potts, and Chip from Beauty and the Beast, among many others.

Dunlop’s long list of Disney body art first began in December 2015 after she got Baloo, Mowgli, and King Louie (The Jungle Book) tattooed on her right arm to honor her father who passed away from a heart attack. This film was a favorite of the two. In fact, some of Jodie’s favorite memories as a child included watching the film with her father.

Prior to this first tattoo, Dunlop had always thought about getting one but never had the edge–at least, until she lost her father.

“Losing my dad made me realize that life is short, so I just went for it,” said Dunlop in an interview.

However, after this first tattoo, Dunlop quickly got the bug for the permanent ink and immediately made another appointment for the same day to add to her new body art. Fittingly, it was Bagheera who she decided to add to the tattoo she had just gotten earlier that same day.

After getting these four characters Dunlop continued adding more characters from the film to her arm until she ended up with a full sleeve of The Jungle book tattoos covering her entire right arm.

As one might imagine, after getting her right arm completely covered in these beloved characters, Dunlop continued taking some of The Walt Disney Company’s most famous characters and enshrining them onto her body.

On Dunlop’s left arm she rocks a huge picture of Bambi and Faline. On her lower right leg, Dunlop has a tattoo of a Little Mermaid design featuring Ariel, King Trident, and Flounder. On her left thigh she has Belle, the Beast, Mrs. Potts, and Chips from Beauty and the Beast. On her hands, she has Bambi and Thumper and on her lower left leg, she has Marie from The Aristocats.

As many characters Dunlop has she says she’s still not done. “I’m going to fill the lower part of my left leg with any other Disney characters I’ve missed out,” said Dunlop. In fact, she plans to continue at least until she covers all four of her limbs completely.

For those who may think all of Dunlop’s designs may cause for a Disney overload, Dunlop says she is a fan of Harry Potter as well and plans to dedicate her back to Hogwarts-themed tattoos.

To some, this excess amount of fantasy characters may seem like a lot of magic. Although, to Dunlop, these just all serve as a reminder that life will have many ups and downs and you have to focus on the happy parts.

“I’ve loved Disney all my life. It never fails to make me smile and the films show that there’s always something to look forward to. Despite all the obstacles, there will always be a happy ending of some sort,” said Dunlop.

What do you think of all of Dunlop’s magical tattoos? Let us know in the comments!