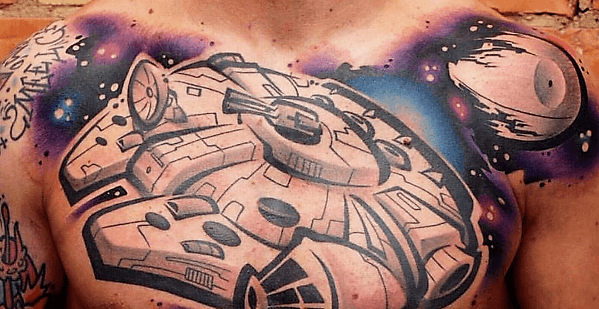 Disney fans are passionate about their love for the company that Walt built. Many have incredible collections, photographs and even entire rooms dedicated to various Disney franchise.

Disney-inspired tattoos are one way many enthusiasts express their enjoyment of Disney entertainment. These wonderful works of art come in all sizes, colors, and shapes. Gathered below is a collection of 21 mousterpieces of inked inspiration. 2. Boba Fett seems to have found a preferred bounty. 3. Troopers of the New Order are well represented. 4. It made the Kessel Run in record time and is now proudly displayed. 5. Darth Vader shows up well in front of the Galactic Empire’s seal. 6. Snow White is back in this amazing and colorful creation. 7. Mad props for Alice and her friends in Wonderland, giving this image life. 8. Goofy, Minnie, Mickey and Donald in front of Cinderella’s Castle clearly call out this Disney fan. 10. There’s no mistaking who owns this ink. 11. Belle shows her love for Beast in a tattoo within a tattoo. 12. Several Disney fairy tales get a leg up with this creative collage. 13. Donald Duck gives color to this Navy-themed collection of ink. 15. This is one apple you won’t want to sink your teeth into. 16. Ariel may not feel so lively here. 19. Maleficent makes a magical appearance above the castle. 20. Ursula dances her way around this fan’s arm. Even celebrities are getting Disney-inspired ink

21. Recently, “Game of Thrones” star Sophie Turner and her fiance Joe Jonas got matching “Toy Story” tattoos from New York City tattoo artist Mr. K. “To infinity & beyond,” written by a tiny rocket ship, is scrolled across their wrists in an elaborate cursive font.

Like the colors of the rainbow, these magical works of art showcase the passion inspired by the magic of Disney entertainment. There’s even a Facebook page where fans showcase their tattoos!

Itchin’ to get inked? Well, you’re in luck! Spooky Empire is just around the corner. Taking place the last weekend in October this creepy cool convention features a Tattoo Track as part of the weekend’s wicked fun. There’s even a tattoo of the day contest. Dig up the details on their website. Do you sport a Disney-inspired tattoo?  What tattoos do you have or do you plan on getting? Please share in the comments below.