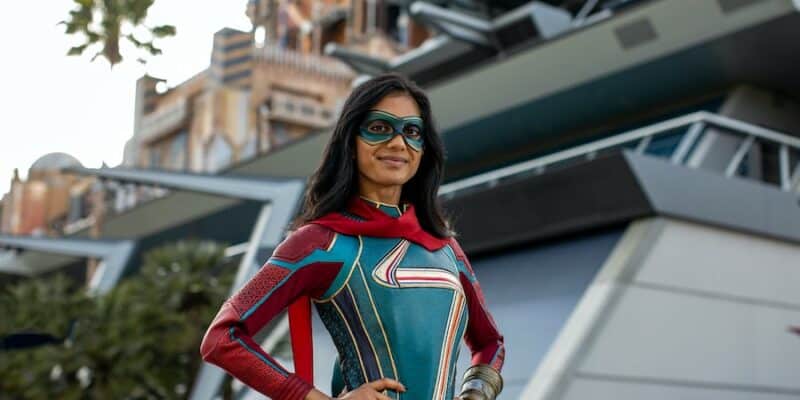 Disney recently announced the arrival of the newest Marvel Cinematic Universe hero at Avengers Campus in Disney California Adventure, and honestly, it is the most relatable one yet.

The official Disney Parks (@disneyparks) account shared a video on TikTok announcing the arrival of Ms. Marvel at Avengers Campus, meaning Guests may run into mega-super hero fan Kamala Khan on their next visit to Avengers Campus, take a photo with her and hear all she has to say about unexpectedly becoming a hero.

In the video, we can see Ms. Marvel being amazed by the buildings at Avengers Campus, saying she can’t believe she’s there, showing that, regardless of her powers, she’s as much of a fan as any Guest who experiences the land for the first time.

Ms. Marvel will be joining Iron-Man, Spider-Man, Black Widow, Captain Marvel, Thor, Doctor Strange, Ant-Man, The Wasp, The Guardians of the Galaxy, Black Panther, and the Dora Milaje, who can currently be found at the Avengers Headquarters and the Ancient Sanctum within the Avengers Campus.

Her debut comes similarly to that of Moon Knight, Scarlet Witch, and America Chavez, the most recent heroes to arrive at Campus after the release of their series or movie. The Disney Parks Blog states that Ms. Marvel will explore Avengers Campus for a limited time.

For fans of the Marvel Cinematic Universe, visiting Avengers Campus at Disney California Adventure is a dream come true. Being able to meet and interact with some of their favorite superheroes, enjoy size-defying food and drink offerings from across the galaxy, and ride the two attractions located in the compound,  WEB SLINGERS: A Spider-Man Adventure and Guardians of the Galaxy – Mission: BREAKOUT!

There is so much to see and do at Disney California Adventure Park! Guests can enjoy Buena Vista Street as they walk the roads Walt had in Hollywood, enjoy a hand-dipped corn dog at Award Wieners, and Head to Cars Land to enjoy the neon signage and Radiator Springs Racers. Guests can also enjoy the Pixar Pal-A-Round on a swinging or non-swinging gondola, learn to fly at Goofy’s Sky School, rock on the Silly Symphony Swings, and catch Jack-Jack on Incredicoaster! The list of rides and attractions never ends!

Will you visit Avengers Campus soon to meet Ms. Marvel? Let us know in the comments below!